Youths must be involved in change efforts — Gerawat 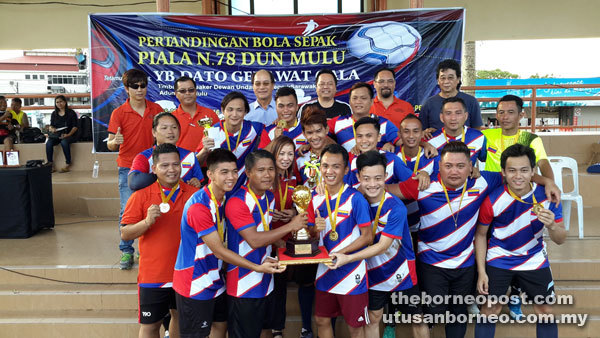 MIRI: Youths must be fully engaged and involved in change efforts at the community level if they are to learn to function as effective members of society.

In stating this, Mulu assemblyman Datuk Gerawat Gala said through active engagement such as in sports or any other health activities, youths can take ownership and become lifelong contributors to the wellbeing of society.

“We must make sure youths take up the baton of leadership for the progress and development of our state and country,” Gerawat said when officiating at the closing ceremony of Piala DUN Mulu football tournament organised by Parti Pesaka Bumiputera Bersatu (PBB) Mulu youth wing which was held at Miri City Council football field here yesterday.

Gerawat believed if youth are included in programmes that empower communities, they can become lifelong participants and take on a sense of ownership in development efforts and contribute to nation-building.

He stressed that youths involved in negative activities like drug taking would go nowhere in their careers and only burden themselves and society.

“In Mulu constituency, I am proud our youths and supporters are also involved in Hari Sukan Negara (which fell on Oct 8),” Gerawat noted.

“Youths are very critical to the development of any society and it is our role to blend and guide them now to be our future generation with a bright future,” the Deputy Speaker of the State Legislative Assembly added.

Commenting on the football tournament, he said it was the first for PBB Mulu and was happy to note the participation of eight men’s teams and three women’s teams.

“I hope next year if the response is good, I will continue to support and promote this activity, not only football but other sports involving youths and teenagers,” he said.

Meanwhile, Usat who spoke earlier said the youth wing would organise more health activities and seminars for youths in the constituency to instil in them positive values so that they do not get involved in bad habits.

In the men’s category, Baram Ulu FC emerged as champion after defeating Tajem FC 2-1 in the final.

The women’s category saw Mixture FC emerge as champion while Permy Galaxy was second and 1 Kimet 1 Tawai was third.