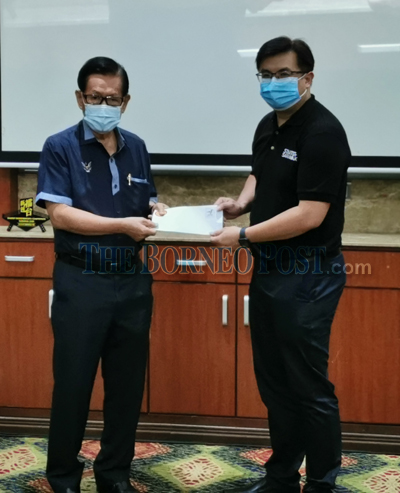 Lee (left) presenting a MRP grant to Startup Entrepreneur Association Sarawak which is received by Hii.

MIRI: The Sarawak government encourages more youths to be involved in entrepreneurship to push Sarawak’s digital economy and development.

In this regard, Chief Minister Datuk Patinggi Abang Johari Tun Openg has been implementing many policies since 2018, including Venture Capital for young entrepreneurs and the Sarawak Micro Credit Scheme, to aid entrepreneurs, Transport Minister Datuk Lee Kim Shin said.

“The Covid-19 pandemic has affected the global job market badly. Starting a business has become a new way out and a new choice for this generation,” he stated in his address when officiating at 2020 Sarawak Startup Entrepreneurs’ Competition at Meritz Hotel Miri yesterday.

The Senadin assemblyman pointed out that in 2018 the chief minister had launched the Sarawak Youth Venture to assist entrepreneurs who are new to entrepreneurship with creative and innovative elements.

He said the Sarawak government initiated these programmes for anyone from the state including those in universities in order to produce entrepreneurs and technical entrepreneurs at all levels, where successful applicants may receive up to RM50,000 to build their startups and for their business operations.

Under Sarawak’s Budget 2020, the chief minister, he added, announced an allocation of RM30 million as Sarawak Micro Credit Scheme to aid entrepreneurs in expanding their business.

Whereas under Sarawak’s Budget 2021, some RM10 million had been allocated by the state government to help small and medium-sized enterprises (SMEs) to promote digitalised business and RM19 million to act as a Special Relief Fund (SPR) for small and medium sized entrepreneurs.

“Under E-Commerce Transformation Plan 2030 (E-Com Y30), the state government will cooperate with educational institutions to provide a platform for local youths to nurture them.

“This is to cater for and promote state government’s aim to build up success in the digital economy.”

On the competition, he congratulated the Startup Entrepreneur Association Sarawak for organising such event which saw a total of 57 entrepreneurs from different sectors taking part.

He said the purpose of the competition was to encourage young people to establish their own businesses and also to attract talents from all walks of life.

Such competition, he added, will be able to gather different new era entrepreneurial models and investment power as well as to showcase new ideas for business.

At the same time, the competition will also become a platform for entrepreneurs from different sectors throughout Sarawak to communicate with each other and to expand business contacts, he added.

He hoped the soon-to-be entrepreneurs will find success in their business and make a sustainable contribution to Sarawak’s digital economy and development.

Later at the same function, he presented Minor Rural Project (MRP) grant of RM3,000 to the association.