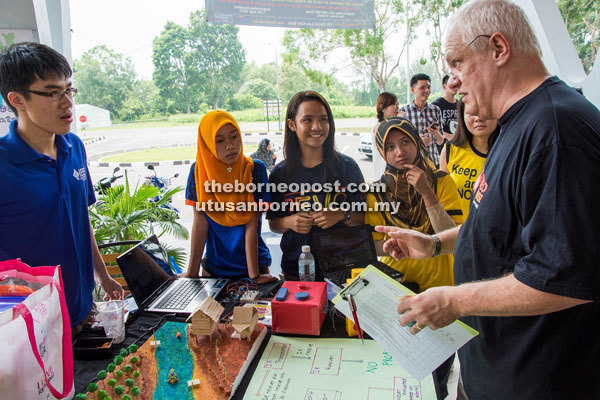 MIRI: A showcase of projects by students of local secondary schools and Curtin University Sarawak (Curtin Sarawak) under the Young Innovate Miri programme will be among the highlights of the university’s Open Day on Oct 8.

The Science, Technology, Engineering and Mathematics (STEM)-based programme is part of the nationwide Young Innovate Malaysia programme and national competition, which are aimed at inspiring secondary students’ passion in STEM, developing their living skills and exposing them to open-source hardware and software.

The programme will feature 24 teams from 12 secondary schools in Miri, as well as six teams from Curtin Sarawak competing in the Open Category. The top three projects and teams selected by a panel of judges will represent Sarawak at the upcoming Young Innovate Malaysia competition to be held in Kuala Lumpur during the annual KL Engineering Science Fair (KLESF) in November.

Young Innovate Miri is organised by the Curtin Sarawak Institute of Electronic and Electrical Engineers (IEEE) Student Chapter and the university’s Leadership and Entrepreneurship Centre with support from the Faculty of Engineering and Science.

Volunteers from the Curtin Sarawak IEEE Student Branch and Curtin Sarawak Leadership & Entrepreneurship Centre assumed the roles of facilitators and mentors, encouraging the students to solve day-to-day problems innovatively with the use of technology and by applying design thinking.

Technical workshops on open-source and microcontrollers were also conducted, and through these games and workshops, the students acquired skills in coding, 3D design, multimedia production and project management. In addition, they were trained in using embedded systems in their designs and participated in practical activities that promoted teamwork, entrepreneurship, and innovation.

“Young Innovate Miri is special in the sense that we do not focus on implementing it in urban schools only. We believe in equal opportunity and have extend our reach to as many schools as our resources allow, and this has included several sub-urban and rural schools,” said Curtin Sarawak’s Department of University Life and Leadership and Entrepreneurship Centre manager Haslina Malek in a press statement last Friday.

According to Haslina, the programme has reached out to more than 3,000 youths in Sarawak since it was launched in 2013.

She added that in 2015, five school teams from Miri represented East Malaysia for the first time at the KLESF. Two teams won gold and bronze recognition and continued to the Young Innovate Malaysia finals in Penang.

“As first-time participants, making it to Young Innovate Malaysia 2015 was a massive achievement for everyone involved. We hope to see the East Malaysian teams going further this year,” said Haslina.

Secondary and primary schools that are keen to be part of the Young Innovate Miri programme can contact Haslina at 085-443939 or by email to haslina.m@curtin.edu.my. The Curtin Sarawak Leadership & Entrepreneurship Centre is also on a constant lookout for project partners and sponsors and welcomes any enquiries from the public.

In addition to Young Innovate Miri, there will be a number of other competitions for secondary school students during Curtin Sarawak Open Day 2016. They are the ‘Curtin Ultimate Croc Challenge’, another electronics design competition using open-source hardware and software; ‘Business Genius Challenge’, a business knowledge quiz; ‘So You Think You Can Spell?’, a spelling challenge; and the semi-finals and finals of the Curtin Gaming Championship featuring DOTA 2 and FIFA.

Curtin Sarawak Open Day 2016 will give visitors an exciting taste of life at Curtin University’s largest international campus. Geared to offer a fun, hands-on learning experience in a festival-like atmosphere, it will be a chance for potential students to explore Curtin Sarawak’s vibrant campus, learn about the courses it offers, and speak with lecturers and current students.