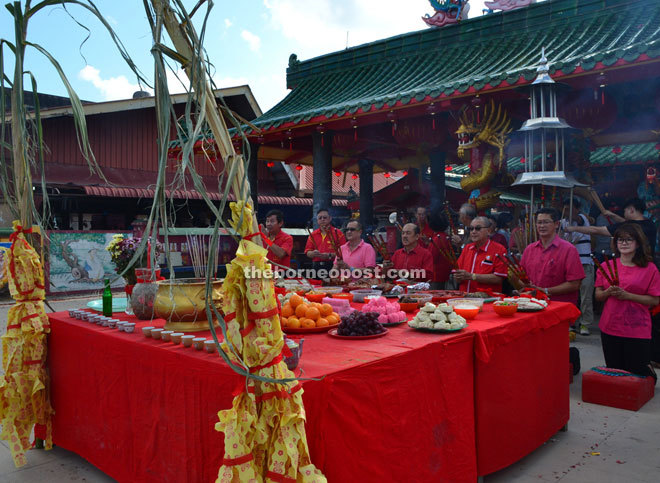 MIRI: Dozens of worshippers gathered at the Tua Pek Kong Temple here yesterday to pray and celebrate the ‘Tian Gong Dan’, loosely translated as the ‘birth of Heaven God Jade Emperor’, which is usually celebrated on the ninth day of the first lunar month every year.

Leading the prayer were Temenggong Lee Sie Tong and the temple’s supervisor Tay Choon Wei as well as the committee members of Miri Tua Pek Kong.

A variety of offerings were set up in three layers to celebrate the Heaven God’s birthday. They comprised vegetables, noodles, fruits and cakes and sacrifices such as roast pig, roast chicken, roast duck as well as seafood like lobster, fish and crab.

“Usually, Tian Gong Dan was celebrated by the Hokkiens. Of course, each celebration has a legend, a story to tell. As for this, it was said to happen circa Ming Dynasty when the Hokkien clan faced the danger of being massacred by Japanese pirates but were spared their lives by hiding in a sugarcane plantation.

“Coincidentally that day was the ninth day of Chinese New Year and also the Jade Emperor’s birthday. Thus, on this day the celebration would include the sugarcane which is called ‘Kam Chia’ in Hokkien and sounds like ‘thank you’ – the Hokkien’s symbolic way of paying their gratitude to the Heaven God,” Tay explained.

He also said a pair of sugarcanes symbolises unity and strength – elements that the Hokkien community has among them.

After the prayer, gold papers were burnt as a customary protocol for paying respects to the deity.