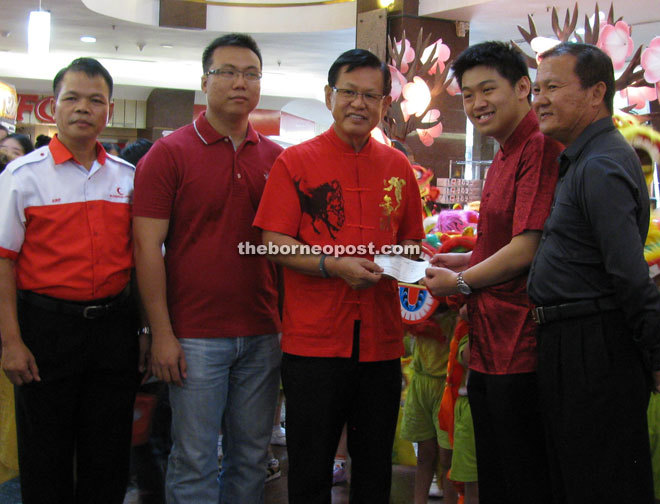 Lee (centre) accepts the cheque from Ling, witnessed by (from right) Chia, Kok and Jurip.

MIRI: Construction of the RM5-million Malaysian Red Crescent (MRC) Miri Chapter’s new kidney dialysis centre in Permyjaya is expected to take off within this year.

Assistant Minister of Communications Datuk Lee Kim Shin said the project blueprint had been submitted to the Health Ministry.

“We are awaiting approval from the ministry. Once we get the green light, we would call for project tender,” he said when met after officiating at ‘Mandarin Orange Throwing’ event at Boulevard Shopping Mall here yesterday.

Lee, who is also MRC Miri Kidney Dialysis Centre chairman, said the new centre would help ease the congestion at the main centre, which caters to some 300 patients registered for the haemodialysis treatment.

“The main centre can barely handle the current capacity and at most, it could only receive another 100 patients — leaving it in full capacity by next year.

“That’s why there is a need to speed up the project in Permyjaya.”

On the new dialysis centre, Lee said it would accommodate 40 dialysis machines that should be able to accommodate 160 patients.

“It is intended that those from Permyjaya would have not to pay more for their transportation costs as they could directly seek treatment at the new centre, once it’s ready.”

“It is also noteworthy to mention that the corporate sector and a number of individuals have been very supportive in that they have given financial contributions to the current kidney dialysis centre. Thus, we are hoping that they would also give the same support to the project in Permyjaya.”

Lee also expressed his appreciation to the management of Boulevard Shopping Mall for their role in fund-raising activities slated for the new centre.

On the ‘Mandarin Orange Throwing’ event, Lee acknowledged that it was a tradition to observe ‘Chap Goh Mei’, which falls on the second week of Chinese New Year celebration and is often described as the Chinese version of Valentine’s Day.

“Chap Goh Mei actually marks the last day of the Lunar New Year celebration. Throwing oranges into rivers on this day is a practice of which the ancient Chinese believed would help those seeking romance find good partners for life.

“Here, I would like to praise Boulevard Shopping Mall for holding the event to promote the beautiful Chinese culture to the public.”

Later, Lee accepted a donation of RM1,000 from the management of Boulevard Shopping Mall for the new building’s fund.