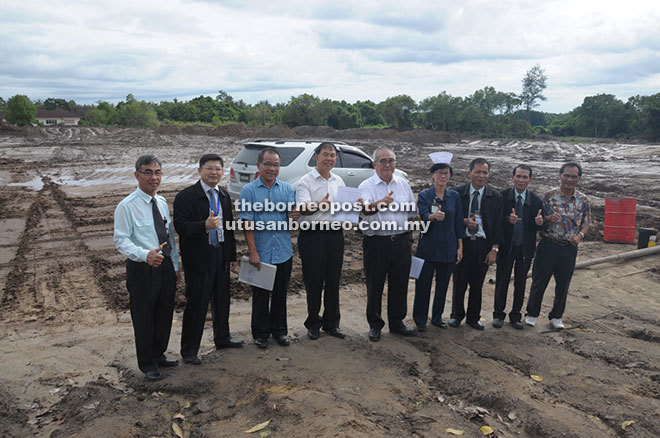 Ting (fourth left) accompanied by Yii, Dr Wong, the contractor and hospital personnel during the inspection.

According to Piasau assemblyman Datuk Sebastian Ting, land-clearing and sand-filling works on the 5.6-acre site are on schedule.

“This is the first stage of the project, which commenced in the middle of August. It will take about six months to let the earth settle before the contractor can proceed to the next stage. We shall be monitoring the progress to ensure that the project would be completed on schedule,” he told reporters during a site inspection of the project yesterday, where he was accompanied by Miri Mayor Adam Yii and Miri Hospital director Dr Jack Wong.

On a related issue, Ting said the lack of parking areas at Miri Hospital was still an unsolved issue, despite the addition of 140 parking bays last year.

“With the construction of a new polyclinic here, which will be drawing more members of the public seeking health services, we should provide ample parking spaces which can only be done via multi-level carparks. Growing population means (there are) more vehicles. The road accessibility from all directions into Miri has also seen people from outside of the city seeking treatment at Miri Hospital. We have to take into consideration of all these things and plan ahead,” he said.

Ting also reminded members of the public to take better care of themselves, as well as to stay fit and healthy.

“Anywhere, healthcare is vital. We cannot stop ourselves from getting sick and old, but we can practise a healthy lifestyle as the prevention from chronic diseases,” he added.