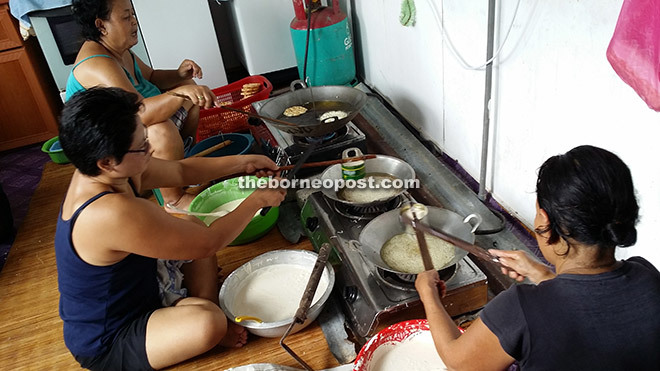 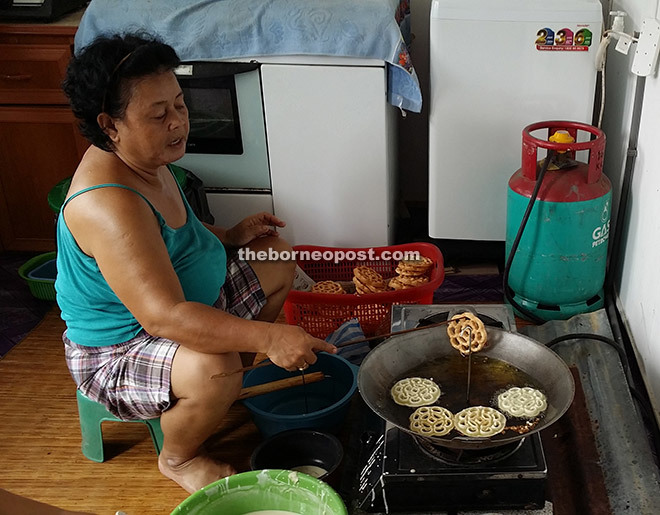 TA03078.jpg660×515 109 KB
MIRI: Womenfolk of a longhouse in Sungai Mallang Atas are busy as ants preparing traditional tidbits ‘penganan’ and ‘kuih chuan’ for the big day on June 1.

With Gawai just around the corner, the women lowered their sights to the hot oil to deep fry ‘penganan’ or more popularly known as ‘sarang semut’ – a traditional delicacy of the Iban community, which is compulsory for important festivals like the Gawai.

Set up with all the utensils, steel moulds and ingredients, they start slaving over the stove from as early as 10am on May 25, to be on time to get the work done before nightfall.

There they were, the women in huddle with occasional banter, organised via a ‘berduruk’ concept in the kitchen at the far end of a ‘bilik’ of the longhouse chief Juliana Esah Kakok.

‘Berduruk’ is an Iban word, translated loosely as ‘labour exchange system’ and ‘bilik’ is a living room in the Iban longhouse.

The side tidbit dish of ‘kuih chuan’ is not a must-have for the occasion but added for variety. It is made from using a stainless steel mould, known among the Iban as ‘chuan’.

According to Esah, it isn’t pricey to prepare the two delicacies. The budget is affordable for longhouse residents.

“I think it’s less than RM100 to buy the ingredients,” Esah told The Borneo Post at her longhouse.

Esah said all the utensils such as woks, cooking stoves, pots, moulds and so forth were her own.

Overall, the women were more than 300 pieces of penganan and over 100 pieces of kuih chuan made during the day which ended at 5.30pm.

“We are set and ready for Gawai eve on May 31, to welcome our Dayak new year on June 1.

“This celebration is also to mark the end of our harvesting season and to welcome the new farming cycle,” Esah said, not losing sight of the significance of the annual festival.

Esah’s 15-door longhouse is located 30 km away or about a 45-minute drive from the city.