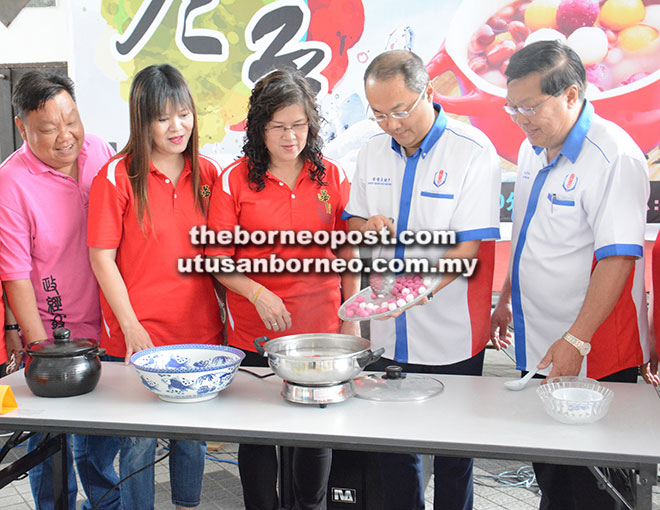 Goh (second right) is seen cooking the rice dumpling balls. Others seen are (from left) Koo, Wong, Tang and Yii.

MIRI: It was an early Winter Solstice celebration for nearly 100 members of the Federation of Miri Division Chinese Associations, Women Section at Miri Civic Centre on Sunday where they treated each other to a wide variety of glutinous rice dumplings.

From the ordinary red and white dumplings scented with Pandan leaves to dumplings with chicken soup, it was an event to embrace the Winter Solstice festival with colourful dumpling dishes from different Chinese clans.

Miri Hopoh Association made an exceptional introduction at the event with its very colourful and catchy dumpling dishes; namely dumpling in sweet pumpkin soup, ABC dumpling and dumpling in chicken soup.

One member told The Borneo Post that the pumpkin-flavoured and chicken soup dishes are from the Hakka Hopoh clan.

“They are extremely different in taste and flavour, and nowadays, the young Hakkas do not really know about these dishes. Therefore, we are delighted to introduce the dishes,” said the lady, who identified herself as Mrs Chia.

The third dish, she added, was her own creation where she mixed the ABC ingredients and added dumpling into the mix.

“Generally, people like to eat the glutinous rice balls in sweet flavour. Hence, mixing the ABC ingredients with the rice dumpling balls isn’t odd at all. It is a bit similar to Taiwan’s popular ice mixed with a wide variety of ingredients.”

Other clans like the Miri Chiang Hsia Huang Association used the colour of blue bell vine as the natural colouring and added raisins as the filling of the ‘blue dumpling balls’, an interesting creation since the blue bell vine has become popular amongst the locals here, blending it with local cuisines.

The event, which was graced by Sarawak Federation of Chinese Associations vice-president Datuk David Goh, has been lauded as a great way to embrace the Chinese culture.

“Winter Solstice or Dong Zhi in Chinese marks the first festival of the 24 solar terms in the Chinese lunar calendar. While those in mainland China and other countries with four seasons are enjoying it in cold weather, we happen to celebrate it in either hot or windy weather. Even so, the weather does not stop us embracing this important festival, therefore, I am certainly glad that every family of every clan is celebrating it in their own unique way,” said Goh in his speech.

He also thanked the women section for their dedication in making the different dishes.

Besides enjoying the sweet savoury dishes, the participants took part in a round of lucky draw and karaoke singing.