Why India can't feed her people

WHY INDIA CANT FEED HER PEOPLE

NEW DELHIFrom the moment Mather left the south Indian state of Kerala, heading 2,500 kilometers north to New Delhi, he knew there was no time to waste.

In the back of his faded red transport truck were 27.2 metric tons of pineapple, ripened and ready for sale. With temperatures approaching 50 degrees, the fruit might as well have been ferried in a broiler. More than 20 per cent would be tossed aside by the time he arrived, fought over by cows, dogs and the children from nearby slums.

[size=150]As much as 40 per cent of all the fruits, vegetables and food grains grown in India never make it to the market[/size].The country wastes more grain each year than Australia produces, and more fruits and vegetables than the U.K. consumes.

Food is an all-consuming crisis here. Waste is only one facet. Agriculture, infrastructure, inflation, innovation and corruption are others. It is a scourge and challenge for this country of 1.2 billion people, which has earned a well-deserved reputation as one of the worlds fastest-growing economies with an 8-per-cent annual growth over the past decade.

[size=150]And yet, 40 per cent of Indian children remain chronically malnourished[/size]. In some areas, the hunger-related statistics are startling. In the central Indian state of Madhya Pradesh, for instance, where UNICEF and other aid agencies run mobile feeding centres, two-thirds of children under five are malnourished a rate thats higher than most countries in sub-Saharan Africa.

In April 2010, reports surfaced that some children in Uttar Pradesh, Indias largest state, were eating mud laced with silica, a raw material used to make glass and soap. The children were not officially classified as poor and were ineligible for official help, the Hindustan Times reported.

Today, there is less food available for each Indian resident that there was 30 years ago. In 2008, the most recent year for which statistics are available, India produced 436 grams of food grains per person per day, a drop from 445.3 in 2006.

Satyajit Majumdar, an economics professor at the Tata Institute of Social Studies in Mumbai, raised an alarm in a January report distributed by the Wharton School at the University of Pennsylvania: Before the situation worsens and we witness a civil war, it is better to feed the hungry citizens of this country.

In many parts of India, the rich loam that once ran 70 metres deep on farm fields is long gone, sapped of its nutrients after years of aggressive farming. As well, groundwater levels in 20 per cent of the country are described by the government as critical or over-exploited.

For about three decades, starting in the mid-1960s, India enjoyed a Green Revolution during which food no longer seemed a problem. In 1999, Indian farmers were growing 70 million tons of wheat, compared to 12 million in the early 1960s.

But the Green Revolution came with a cost: hybrid grains demand relatively huge amounts of water and fertilizers, and plunging groundwater levels and soil erosion are the result.

The agricultural sector, which employs more than half of Indians, lags behind the rest of the economy, growing about 2 per cent a year.

Shrinking too are the countrys farms as inherited land is split and split again among brothers. The average farm in India is now smaller than five acres, 50 per cent less than in 1947, when India gained its independence. Smaller plots some the size of a basketball court typically means smaller incomes.

And with meagre earnings, many small farmers cant afford to invest in new technologies that would increase their productivity.

This year, Indian officials estimate, farmers will grow about 1,798 kilograms of food per hectare of farmed land, down 5 per cent from 2010.

The Peter G. Peterson Institute for International Economics in Washington predicts Indias agricultural output will actually fall by 30 per cent by 2080.

We are at a crossroads, says M. Hasan, a scientist at the India Agricultural Research Institute in New Delhi. Farmers are desperate and uneducated and water is so scarce because they have used it faster than it can be replenished. So now, they are using so much more pesticides, fertilizers and insecticides. Its killing the earth.

In recent months, Thanks to a surge in oil and petrol prices and the rampant corruption and inefficiencies of the public welfare system, food prices have skyrocketed by 20 per cent, and many of the countrys poorestthe labourers who actually grow the grains cant afford to buy them.

Some farmers see no way out. Between 1997 and 2009, an estimated 200,000 Indian farmers committed suicide, buried under mountains of rising debt.

Its a double crisis, said C.P. Chandrasekhar, a scholar at Jawaharlal Nehru University in New Delhi. Theres both falling food production and people who cant afford to eat. Its a tragedy.

India has a well-earned reputation as a breeding ground for innovation. Cities and remote villages teem with tales of ingenuity.

Just recently, Indian media have profiled an inventor who wheeled around Mumbai on a home-made, solar-powered scooter, an entrepreneur who has created a market for expensive writing paper made from elephant poop, and a group of university students who claim to have found a way to use the husks from coconuts to clean industrial spills in open water.

Yet stories about advances in the effort to solve Indias food crisis remain rare.

Agricultural research isnt glamorous, says Sunil Nath, dean of the biotechnology department at the Indian Institute of Technology in New Delhi. In the summer when its so hot, you have to leave that air-conditioned lab and go out into the villages and fields. It takes willpower.

Nath said his department receives about 400 applications per year from prospective students. The last time one was interested in pursuing an agriculture-related dissertation was in 1986.

Students come in dreaming about winning a Nobel Prize; no one thinks you get that in agriculture, he says.

While China pumps $3.5 billion into agricultural research Chinese farmers grew 6.2 metric tons of rice per hectare in 2008, double Indias output Indias spends a fraction of that.

We do this half-hearted, says Deepak Pintal, a professor at Delhi University. We have lots of brick and mortar with 46 agricultural universities and 17 national research centres, but how many papers published in top journals? Hardly any.

Theres an agricultural fatigue, he continues. We have nothing new to offer. Look at Canada, where every 100 kilometres theres a granary. Dont we know how to make new grain silos?

Since 1996, India has built seven grain silos for a total of 20, says Sumit Bansal, an official with the Food Corporation of India, which distributes food stocks to regulated shops. Canada has 400 silos.

Foreign big-box chains including Wal-Mart, U.K.-based Tesco, and Frances Carrefour all covet access to Indias $435-billion retail market and are anxious to expand beyond existing wholesaling practices. This may come with demands that they make investments in infrastructure to shore up electricity supplies and improve local roads.

This is, after all, a country where a 300-kilometre trip on roads near the capital can take eight hours.

And theres a good chance the drive will be in the dark. Kumari Mayawati, chief minister of Uttar Pradesh, recently promised improved electricity to her constituents, who struggle through extended power outages every day. In coming months, however, locals will have to navigate only 10 hours of blackouts each day.

A reliable power supply is partly what is scaring companies from developing improved refrigerated transport services which would help reduce spoilage.

The lack of power is a huge challenge, said Ravi Kannan, whose company Snowman Logistics operates 200 trucks at 16 locations in India. You wouldnt believe how much diesel we go through.

While India currently has about 3,500 cold-storage facilities, it needs many more enough to store an additional 10 million tons worth of food, according to a recent study by the consulting company KPMG.

On a recent afternoon in Fazilka, a small, tight-knit community in western Punjab, piles of harvested grain sit in three-metre-tall mounds in a government holding facility.

The grain had been rotting outside on pine palettes, uncovered for at least several years.

Kapil Trikha, a local journalist, explains that this is not necessarily bad news for the local elected official.

He owns a brewery where he makes country liquor, and once the grain starts rotting here and fermenting, he basically takes it for nothing, says Trikha, a reporter with Day and Night, a Punjabi cable news channel. We dont have the best leadership.

In October, newspapers reported that in Punjab and Haryana states, Indias traditional breadbasket, auditors had discovered as much as 67,000 tons of grain rotting under the sun. It became a national scandal.

Tarun Khanna, an economics professor at Harvard Business School, has a theory for why politicians here seem ambivalent towards increased agricultural research.

Increasing investment in agriculture is the right thing for the country but they arent doing that because its not why they are in politics, Khanna says. The average Indian politician is there to milk the system. Even now, at a time when were facing a demographic albatross. 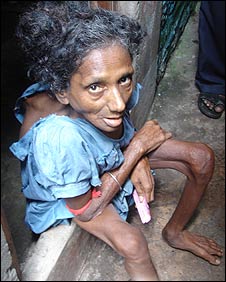 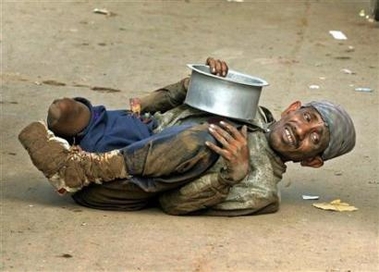 Increasing investment in agriculture is the right thing for the country but they arent doing that because its not why they are in politics, Khanna says. The average Indian politician is there to milk the system. Even now, at a time when were facing a demographic albatross.

2012, the last paragraph of your post answers it all. there is no reason for poverty when the country agriculture produce is bursting at the seam from over production and lack of storage silo and poor transportation system. its time to shoot the politicians, literally.

India & China were equals in 1950s, today China’s GDP per capita is 4 times higher than India. Infrastructure plays a major role, China spends 20% of its GDP on infrastructure (USD$1,200 billion) while India spends 10% of its GDP (USD$150 billion)

When nations industrialize, they require quick transportation of raw materials to industries, and finished goods to markets - in huge quantities. Say I have 500,000 tonnes of imported iron and coal at the port, I want it transported to the industries to produce steel, and get the steel returned to the port for exports. Who can deliver quicker for me? Without building more or upgrading its outdated infrastructure on time, India’s industrial growth can only be limited to that much. Go further and it would put strain which may result in the breakdown of existing transportation system.

couldnt agree more with you, mevotex.

India’s worst enemies are her own self-serving politicians.