We will ‘swim or sink’ with Wong, pledge UPP members 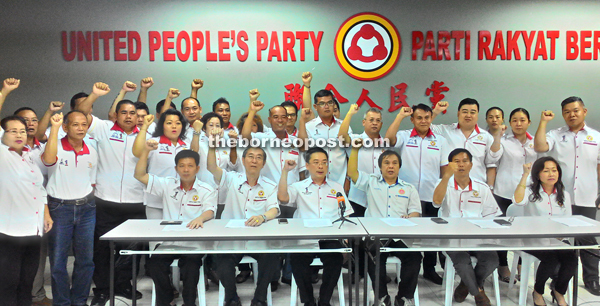 KUCHING: Leaders and members of United People’s Party (UPP) from across this division, Sibu and Miri are standing in arms, pledging that they will ‘swim or sink’ with their president Local Government and Community Development Minister Dato Sri Wong Soon Koh.

This show of solid support came following a news report in a Chinese daily yesterday, which stated that SUPP demanded Wong’s retirement as a pre-condition to the negotiations between the two parties.

According to the report, SUPP has proposed for Wong to retire from politics as a pre-condition to open up negotiations between the two parties.

In return, SUPP president Senator Datuk Dr Sim Kui Hian has offered not to stand in the next state election.

“If the news report is true, UPP categorically rejects the proposal for Dato Sri Wong to retire from politics as a pre-condition to negotiations. Such a pre-condition smacks of bad faith and shows a personal vendetta aiming to get rid of Dato Sri Wong. It will not lead to any possible compromise,” said UPP deputy president Datuk Dr Jerip Susil during a press conference at the party headquarters here yesterday.

Citing a statement that was circulating across all three regions, Dr Jerip said that it would be highly regrettable that SUPP would sacrifice a chance to compromise for the sake of Chinese unity, just to try to get rid of Wong.

“Such a pre-condition displays a lack of sincerity to negotiate, and can only be an excuse (given) to the chief minister and the public for not entering into any negotiation with UPP.

“UPP leaders declare their total, unequivocal and undivided support for Dato Sri Wong to lead the party into the next election. It is not for SUPP to tell us who our leader should be; neither would we presume to tell them (SUPP) who their president should be,” said Dr Jerip, who is also Assistant Minister of Public Health.

The statement pointed out that although UPP was ready and willing to negotiate with SUPP for the good of the Chinese community, it also stressed its stand that only Wong would lead UPP in such negotiations and any suggestion by SUPP for him (Wong) to retire from politics would be rejected outright.

Party members from Tarat, Bengoh, Padungan, Batu Lintang, Pending and Kota Sentosa branches also made their presence at the UPP headquarters as a reflection of their solidarity.

Meanwhile in a similar sentiment, UPP Senadin chief Keith Chin also voiced out his solid support for Wong, underlining that the latter’s leadership would be crucial in taking UPP in the next state election.

“Dato Sri Wong’s leadership in UPP has never been an issue; hence, he will lead UPP. All other claims by party rivals that state otherwise should really be dismissed.

“Our Senadin branch is pledging full support for Dato Sri Wong as I have stated in my previous statement, which was published by The Borneo Post on

“We also take the opportunity here to reject the proposal for him (Wong) to retire as a pre-condition for negotiations (with SUPP),” said Chin when contacted by The Borneo Post yesterday.