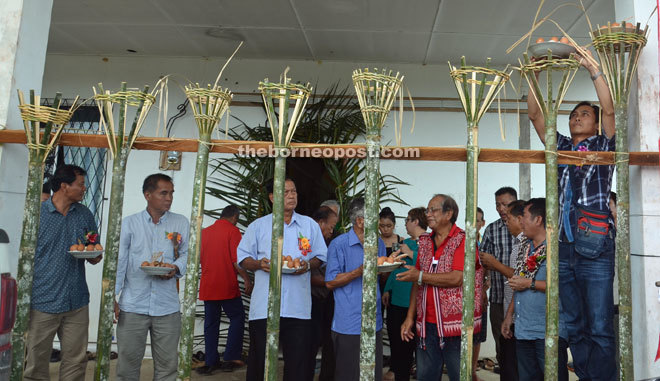 Kong (right) arranges the ‘piring’ on the ‘teresang’ (woven bamboo basket) as Alexander (second right), Unchin (in red shirt) and others look on.

Ngemah assemblyman Alexander Vincent said residents there had piped water supplied to their longhouses but it was hampered by low water pressure.

“We want the government to build a new water tank at a suitable location in Mapai to resolve this problem.

“There is a water tank in Pedai but it is not sufficient to cater for longhouses up to Mapai, Bawan and Bejait areas,” he told reporters after he officiated at a ‘Gawai Kenyap’ at Rumah Unchin Demong in Bejait here recently.

He said he would raise the matter in the State Legislative Assembly (DUN) sitting next month.

Alexander who is also Parti Rakyat Sarawak (PRS) supreme council member said another thing he would raise was on ferry service to Kanowit town. He said he had submitted a proposal on the matter under the Rural Transformation Programme (RTP) for next year.

He had proposed that the ferry ramp be built somewhere near the jetty of former SMK Sedaya site.

“It would cut short travel time for those living in Nibong/Tada to get to Kanowit town by car.

“Instead of driving up to Durin Bridge they can use the ferry to cross the Rajang River,” he said.

Meanwhile, a special ‘miring’ (ritual) ceremony was held during the event hosted by Unchin.

According to Unchin, he had a dream in July this year and in his dream he saw he himself with Alexander and Tuai Rumah Kubu Sandom visiting a longhouse.

He said someone he didn’t know had told him in the dream to hold a ‘miring’ ceremony using seven ‘piring’ (offerings) placed at different heights.

“I ignored the first dream until the second time I had it about last month,” he said.