Villager gets help instead of blame for carelessness 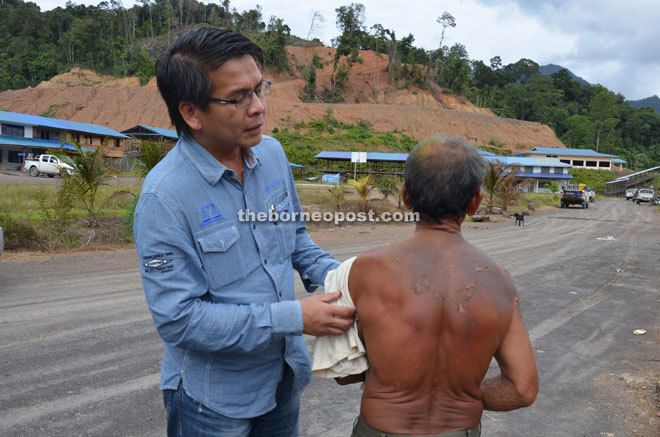 Dennis examines the burn on Laing’s back.

MIRI: Seventy-two-year-old Laing Ajang, who suffered burns on his back from a fire that razed part of his longhouse, could be in a dire situation if not for the compassion and understanding of his fellow villagers.

Instead of blaming him for the fire that razed 12 ‘bilik’ of one of the four blocks of their longhouse in Long Anyat in the interior of Baram, they even gave him an electric rice cooker. The fire victims and other villagers understood that Laing had no intention of causing the fire that made 12 families homeless.

They agreed that it would not resolve any issue if they blame him and take harsh actions against him or cast him out, saying, “He (Laing) is also a victim and lost everything in the fire. The most important thing is for us to be united and strong and work together to rebuild our life and longhouse,” said village headman Johnny Bilong.

The headman’s ‘bilek’ was among the 12 razed down in the fire that occurred around 2pm last Sunday. It was said there were only six people in the block when the fire occurred as others including the headman were away in Long San sending their children to school for the new term.

With the burn on his back and part of his head still unattended to, Laing approached Telang Usan assemblyman Dennis Ngau and an officer from Miri Welfare Department, Joseph Lau, accompanied by PBB Apoh branch chairman Jok Eng Jok.

“I was cooking rice in a pot over firewood. After the rice was cooked, I put off the fire, then I retired to the front part of the ‘bilik’ to take some rest. Later while resting I smelled something burning from the kitchen,” he said when relating the incident to Dennis.

He said the fire came from a stack of firewood that he placed near the fireplace.

He said he only realised the burn on his back after he felt pain and being told by a neighbour who came to assist.

The fire spread fast due to dry building materials. Fortunately, they managed to stop the fire from spreading to the other block by building a fire breaker.

Dennis commended the victims and others for being compassionate to Laing and not blaming him for the incident.

“It is important for you all to be united and work together to rebuild your lives and longhouse. Be patient for aid from the government through the Welfare Department,” Dennis told them.

In a briefing, Lau told Dennis and the victims that they would receive RM2,500 from the government for buying building materials besides food items, cooking oil and cooking utensils.

He also said their school-going children would be given RM120 each for uniform, stationery and other school necessities.

It was also agreed during the briefing that the Welfare Department would help to purchase building materials for the victims instead of them buying which would be costly.

Meanwhile, Dennis announced a grant of RM100,000 from his minor rural project fund to rebuild the longhouse and said he would approach Baram MP Anyie Ngau for more funds.

He reminded them to be careful when cooking and handling electrical appliances and not let their children play with fire.

They were also advised to lodge police report if they lost their identity card and other important documents.

Currently, the victims are taking shelter at a temporary hut near the longhouse.