Village to have fishermen’s market soon 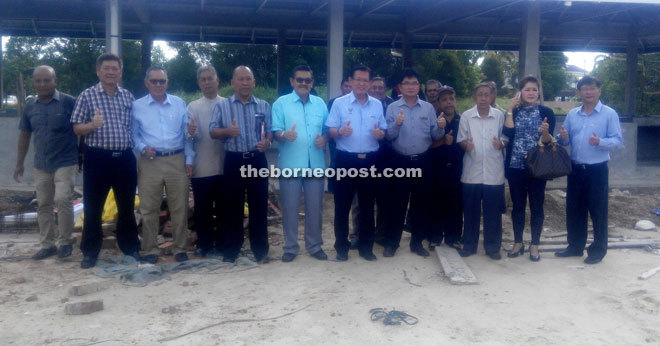 MIRI: Fishermen of Kampung Luak can soon sell their catch at the village’s new fishermen’s market once it is completed in January next year.

Assistant Minister of Communications Datuk Lee Kim Shin told reporters during a site inspection yesterday that the construction of the market which began in August was a little behind schedule as it was planned for completion this month.

“We might have to extend the completion date to January and once it is done, the fishermen can start to obtain their places at the market and start their trade,” he said.

Constructed at a cost of RM200, 000 under the Agricultural Development Council of which Lee is the chairman, the maintenance of the market will fall under the Miri Fishermen Association.

“The market will have 18 stalls, which the fishermen who wish to trade there are advised to tender for the licence from Miri City Council,” he revealed.

It is the third fishermen’s market in Miri, with the first and second market located in Piasau Utara and Bakam.

According to Lee, it is an ideal place to purchase fresh seafood.

“We have identified the need for this market due to high demand from the general public.

“Additionally, another fishermen’s market is set to be built in Kuala Baram, Batu 1 which will also cost RM200, 000 with a fund granted from the Ministry of Agriculture,” he said.

Meanwhile, Lee called on the Drainage and Irrigation Department (DID) to build a revetment to divert water from storm drains into the sea without causing more soil erosion.

“The current condition is causing difficulty for fishermen going out to sea via the beach. Hopefully it (revetment) will be made possible by next year,” he said.

During the site inspection, Lee also checked on the recently completed water retaining wall which was built at the cost of RM200, 000.

Due to strong winds and waves, Lee urged for additional safety precautions to be taken to further strengthen the wall so that it will not crumble easily.