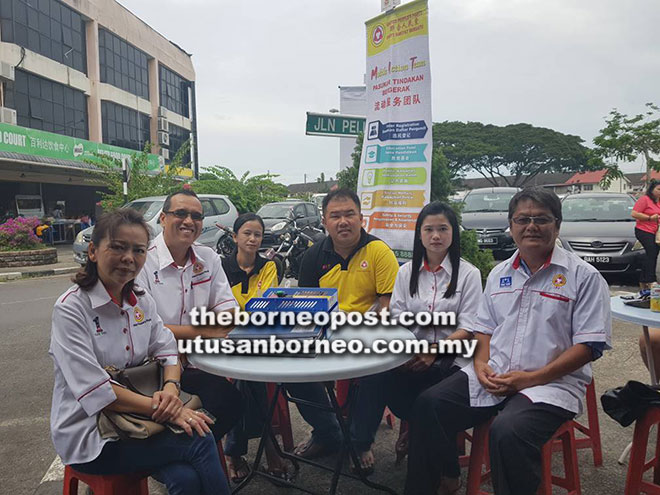 Chai (second left) and his team members calling on the people to support their ‘MYY Hope’ programme.

MIRI: United People’s Party (UPP) Pujut branch on Saturday launched the first of its three- part series of collecting the people’s aspiration on the future of Miri called ‘MYY Hope’.

“The effort to collect the people’s ideas and feedback would be divided into three parts – economy (part 1), social politics (part 2) and development (part 3).

“We actually have obtained some of the ideas and feedback from the community through the first and second cycle of our MAT programme,” he stated when contacted by The Borneo Post yesterday on the ‘MYY Hope’ programme.

Chai explained that ‘MYY Hope’ is actually the branch’s vision on how the leaders of Miri City can steer the development of Miri back on track in the years to come.

He said they would be looking at how to rejuvenate the economy, ensuring the continued development of infrastructure and setting policies that protect the uniqueness of Sarawak as a partner of the Federation of Malaysia.

“The ideas and hopes set by ‘MYY Hope’ are not meant to contradict the state government’s vision for Miri as a resort city, but more of putting in place the missing pieces to catapult Miri City towards that ‘Vision’.

“Tourism, education and industrialisation can all co-exist and be integrated to develop Miri into ‘The Most Liveable Resort City’ which is in line with our city’s vision.”

He further said ‘MYY Hope’ is meant to provide the current leadership with an alternative direction which can bring Miri City to new heights even with the current economic slowdown, both domestically and internationally.

Miri City, he added, needs to contribute its fair share both economically and socially towards the development of Sarawak as a developed and modern state.

Therefore, he felt the state and federal administrations need to plant the seeds for community wellbeing.

On the party branch’s visions, he said they would like to see Miri have an information communication technology (ICT)/petroleum university, the setting-up of Petroleum Sarawak (Petros) headquarters here and the deepening of Kuala Baram river.

“The next series of collecting feedback for the second and third part would be conducted starting next week.

“All the feedback would be compiled and then submitted to the state government through relevant ministers and YBs (assemblymen).”