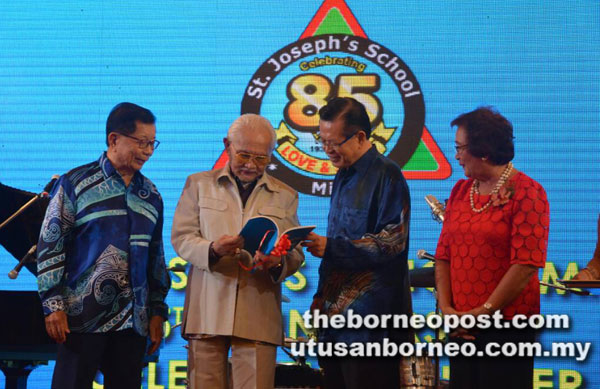 MIRI: It was a gleeful evening for over 800 guests and alumni of St Joseph’s School, Miri who gathered for the 85th anniversary of the school and reunion dinner at the Grand Ballroom, Imperial Hotel here on Saturday.

The guests, who appeared jovial the very moment they entered the dinner hall at 6.30pm, are from all walks of life from near and far.

The gathering marked another significant year for all the alumni.

“The idea of a reunion dinner for St Joseph’s School Miri was mooted by a group of fellow Josephians in February 2015. As St Joseph’s School would be celebrating its 85th anniversary in 2017, the committee unanimously decided that Oct 28 would be the most appropriate date.

“The objective of the celebration is to reach as many students and teachers and encourage them to join in the celebration of the 85th anniversary of the establishment of the school,” said organising chairperson Winni Saba.

The grand reunion dinner was graced by alumni patron and an old Josephian himself, Head of State Tun Pehin Sri Abdul Taib Mahmud.

A book entitled ‘Commemorative Book: St Joseph’s School Miri’ was launched by Taib at the event.

He commended the organising committee for their initiative and efforts in producing a commemorative book to mark the establishment of the school.

“This commemorative book should serve as a resource material, which will be available to the public, future generations in particular, in the archives of the school.

“Personally, I feel proud to be associated with the school in the earlier part of my education.

The education that I had received from the Mill Hill Fathers gave me not only the academic foundation but also the discipline and opportunities that, in one way or another, shaped my thinking, attitude and character,” said Taib.

He also commended the efforts of the committee members in contacting the various sources, from the Mill Hill Missionaries in London to former students and teachers in different parts of the world, inviting them to contribute interesting memories of their days in their beloved alma mater.

In this regard, Taib said all former students should consider it an honour to contribute towards continuous development of the school like upgrading its facilities for academic and sports endeavours, or community services to live up to its motto of ‘Love and Serve’.

He urged the alumni to continue to work together in building the state towards greater heights of success and advancement.

“We must continue to become a model in showing the discipline and commitment that have been inculcated in us while in school especially in maintaining our unique cohesiveness as a multi-ethnic and multi-religious society,” he added. 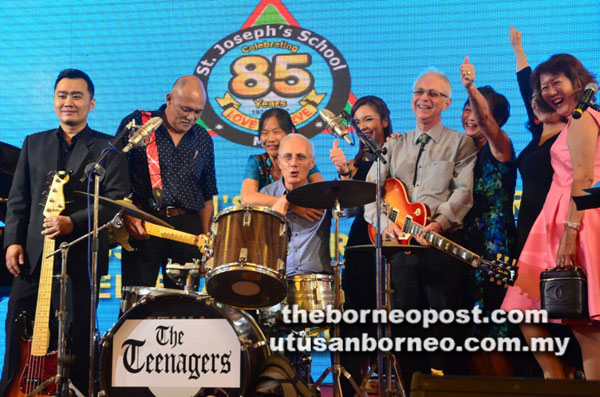 The Teenagers of the 60s rock the stage with their fans.

Meanwhile, Winni said the committee had decided to publish the commemorative book that depicts the early establishment of the school, the founding fathers, the principals and teachers who had helped with the education of students and development of the school, to further commemorate the event.

Included in the book are articles on events and anecdotes written by ex-Josephians.

Winni revealed that generous ex-Josephians had contributed towards the organising of the event.

“With the contribution, the committee has decided to finance three school projects; namely construction of new students’ toilets for the secondary school, upgrading of the mini hall of the primary school by adding aluminium louvers to keep out the sun and rain, and enhancement of English reading materials for the primary and secondary schools,” she added.

Miri St Joseph’s Alumni Association also held a run on Sept 24 to raise funds for the school in conjunction with its 85th anniversary.

Among the activities held during the reunion dinner was a brass band performance by St Joseph’s very own ‘Teenagers of the 60s’. They were joined by ex-Josephians Abdul Rahim Sheikh Manan and Jeanne Marie Druce, who is currently studying at the Academy of Music and Performing Arts in Sydney, Australia.

Other activities included a performance by a renowned singer of yesteryears Rose Iwanaga from Kuching as well as lucky draws.

The evening ended with the attendees letting their hair down and dancing to the soulful tunes of The Teenagers of the 60s.