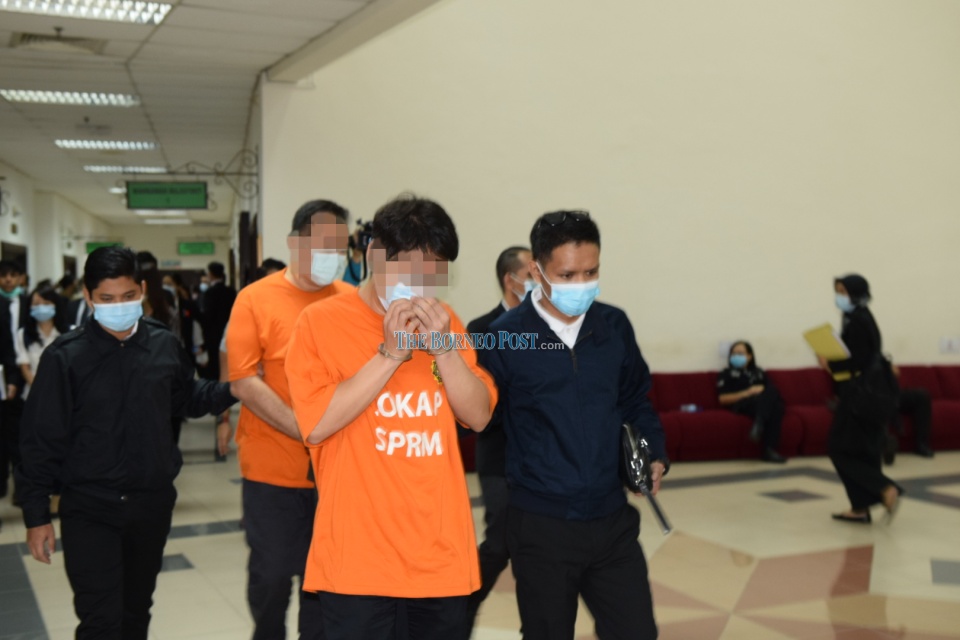 The two suspects being escorted by MACC personnel at the courthouse after the proceeding on last Friday.

KUCHING (Sept 13): The two company directors, who were further remanded on last Friday to facilitate the Malaysian Anti-Corruption Commission’s (MACC) investigation into the allegation of falsifying claims on a ‘Jiwa Murni’ rural road project worth RM800 million, have been released on MACC’s bail.

“My client is released and we record our appreciation to MACC in their handling of the matter done professionally and my appreciation to learned DPP (deputy public prosecutor) S. Thangavelu and his team,” said Shankar when contacted by The Borneo Post here today.

Tang, when contacted said: “SPRM (MACC) released both suspects and court made an order of release.”

Both Shankar and Tang said their clients were released on MACC’s bail.

The two high profile suspects, with the ‘Datuk’ title, were placed on a two-day remand following their arrest in a special MACC operation here on last Tuesday.

Their remand order were extended for another two days on last Friday as the MACC required more time to complete their probe.

The case was investigated under Sections 16(b), 17(a) and 18 of the MACC Act 2009, which carries penalties of imprisonment for a term not exceeding 20 years and a fine not less than five times the sum or value of the gratification which is the subject matter of the offence, upon conviction.

The MACC in a statement on last Tuesday said the two company directors were partners owning three companies that monopolised the ‘Jiwa Murni’ project.

The project, under the Defence Ministry, involved the implementation of 10 rural road upgrading works in Miri, Kapit, Ba Kelalan, Limbang and Belaga.

In its statement, MACC said: “Our informant said many complaints had been lodged by locals against the poor condition of these rural roads because they were not built according to specifications.”

It added that these rural roads located in Miri, Kapit, Ba Kelalan, Limbang and Belaga were damaged after few months of building.

MACC said based on technical research, the works done were not in accordance with the Public Works Department’s (JKR) standard.