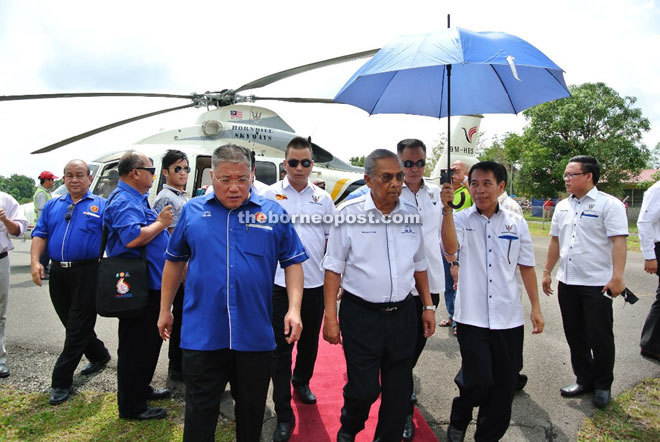 Speaking at the ‘Leaders Meet the People’ gathering at the Dewan Suarah here on Wednesday, the Bintulu MP also said the party would be all out to ensure that the state BN will be returned with a resounding victory in the coming polls to give Adenan a stronger mandate to lead the state.

He told the Chief Minister that the big crowd of over 8,000 attending the gathering was strong proof that the people of Marudi wanted him to lead the state for at least five more years and for Datu Dr Penguang Manggil to be the BN candidate for Marudi.

Even the shopkeepers voluntarily closed their shops so that they would not miss the chance to meet the Chief Minister to declare their support to him and to Penguang, he added.

“In the 2011 state election many Chinese voters in Marudi did not vote but if Datu Dr Penguang is nominated to be the BN candidate I guarantee that the Chinese community will turn up to vote and vote for Penguang,” he said.

He added that support for Penguang had been overwhelming as even members of Teras, PKR and DAP numbering more than 3,000 had joined SPDP the past few months.

Besides thanking SPDP Exco members led by Youth chief Robert Ayu for successfully organising the event, he also extended his gratitude to PBB, SUPP and PRS members for helping to organise the event, which he said indicated their support for Penguang.