Ting: State election has to happen eventually as required by constitution 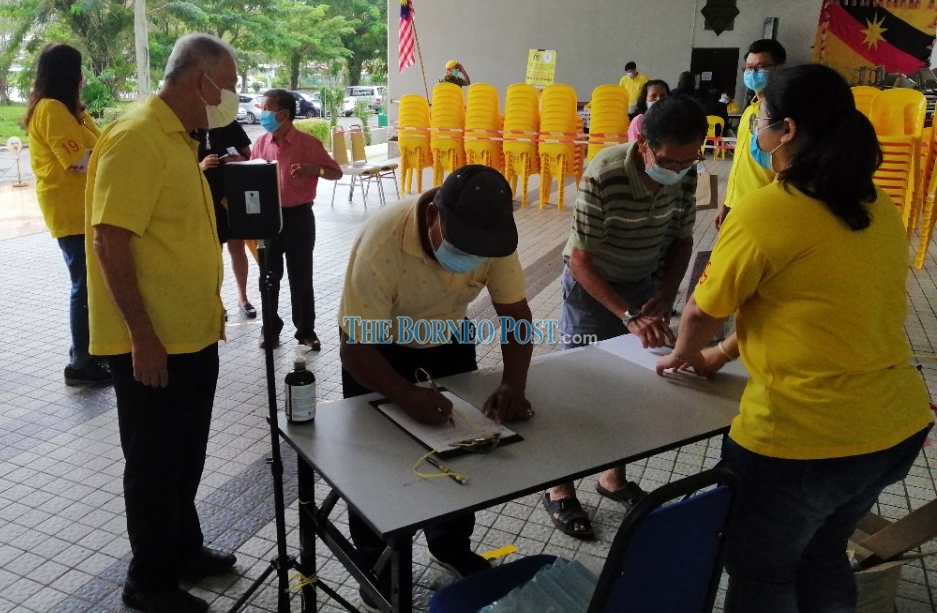 Ting (left) assisting senior citizens who were at Miri Civic Centre to collect their KGC cards.

MIRI (Oct 19): Sarawak United Peoples’ Party (SUPP) secretary-general Datuk Sebastian Ting said the 12th State Election will have to happen eventually as it is required by the state constitution.

“The question now is when because when the five years’ time is up, it has to happen. By the fifth year, the state assembly will be dissolved automatically.

“Thus, it is not a decision whether to hold or not hold the election, but when and how are we going to do it,” the Assistant Minister for Tourism, Arts and Culture told reporters in an interview today.

In Sabah’s case, Ting said the state was forced to hold an election and it was unfortunate that it had happened when the Covid-19 cases were rising.

“If we are given the choice, the safety of the people is definitely our main priority. However, according to the Constitution, we do not have much choice in hand.

“Between now, until the expiry date next year, we have to choose, whether to do it now, when the cases are very much under control, or next year. Yet, we wouldn’t be able to know what would happen by then, how the situation would become,” said the Piasau assemblyman.

Regardless of when the next state election will be held, Ting believed that practising the new norm and adhering to the Covid-19 standard operating procedures (SOP) is vital.

“Arising from Sabah’s experience, it is not possible to have a crowded ‘ceramah’ (political talk) anymore. Whether to reduce the capacity or doing it through online, or reducing the campaigning period to minimum of seven days, these will be decided later.

“It is good to go online as a new alternative, but it is only doable when the people are ready. We must also take rural voters into consideration.

“The internet coverage (in rural areas) may not be as convenient as the urban areas, therefore we must look into ways that could reach out to everyone, yet at the same time, keeping everyone safe,” said Ting.

Earlier, Ting was at the Miri Civic Centre to assist the senior citizens in collecting their Kenyalang Gold Card (KGC). Booths were also set up for new KGC registration from 8.30am until 5pm.

The post Ting: State election has to happen eventually as required by constitution appeared first on Borneo Post Online.