Tiger prawns refuge centre to be set up in Kuala Baram 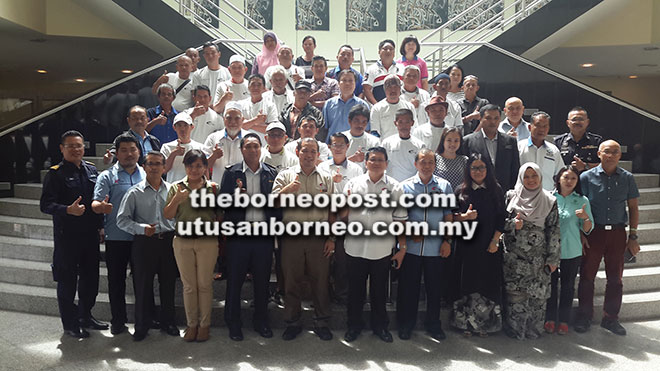 Hadil and Belayong (front, fifth and sixth right, respectively) in a photo-call with those attending the function.

MIRI: The Fisheries Department will set up a refuge centre for tiger prawns, which are commonly found in the waters off Kuala Baram, as a way to stop overharvesting.

“There is a need to control harvesting by setting up a refuge centre here (Kuala Baram) to manage the prawn population,” he said during a function with stakeholders involved in tiger prawns here yesterday, where state Fisheries Department director Belayong Nyuak, its head of enforcement Fairol Tajuddin Suhaili, and Miri Fisheries Department Region III officer Buniamin Kiprawi were present.

According to Hadil, the proposed centre for tiger prawns would extend about five to seven nautical miles off the coastlines of Tanjung Baram to Kuala Bakam, and with a depth of 50m – covering an area of 295.5 square miles.

He said the area is suitable for the breeding of tiger prawns because of the presence of mangrove trees and ‘nipah’ (estuary palms). Once completed, the centre would be closed to trawlers from May to September every year – the breeding season for the prawns.

Hadil also said based on a research done in 2015, about 18,000 tonnes of tiger prawns were harvested off the shores here, bringing in revenues to the tune of RM26.84 million annually.

Tiger prawns are also found in the waters off Samatan and Bintulu but those found off Kuala Baram are said to be much superior – perhaps due to its more favourable ecology and habitat.