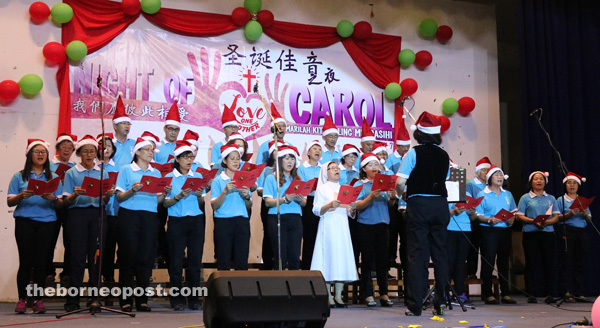 MIRI: The Christmas message of love was shown by performers and those coming for the Catholic Christmas Concert held at the Dewan Suarah Miri on Friday night.

Bishop Richard Ng of the Roman Catholic Diocese of Miri was among the thousands coming for the three hours of carolling, praise and worship, choir, drama and dance.

There was also Gospel sharing by Fr Martin Sta in Mandarin and Fr Gabriel Cheong.

Some 300 performers from various units of the Diocese helped made the concert a success, achieving its theme ‘Love one another’.

Bishop Richard in his speech said the concert was to share God’s love through carols, drama and the Gospel, adding that Christmas was a celebration of God’s great love for the people.

“He (God) loves us enough to send his Son Jesus to be born as a human person so he can take our sins away. Because God loves us so much, we must respond to His love by loving Him and one another.

“This is the reason for celebrating Christmas. We are filled with joy and love and want to share it with each other,” he stressed.

Bishop Richard added that the annual concert entitled ‘An Evening of Carols’ was organised especially for those who have not yet known Jesus.

“It is hoped that through the singing of beautiful Christmas carols and sharing of God’s word, they may be touched to want to know more about Jesus and follow him,” he said.

there were photo booths and collection of donations for the building fund of Wisma St Joseph project.