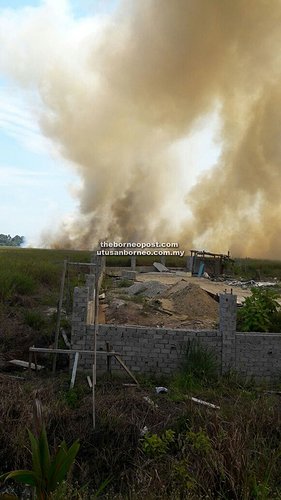 Smoke from the open burning in Tudan Phase 4 can be seen from nearby residential areas like Senadin and Permyjaya.

MIRI: It looks like open burning is back with the first activity detected at Tudan Phase 4 around 12 noon yesterday.

The thick smoke was visible from nearby residential areas Senadin and Permyjaya.

The fire which spread wildly, fanned by strong winds and dry weather, almost destroyed a house belonging to a family.

According to the houseowner known as Roselind, in her 30s, she first spotted the smoke from afar, but by about 12pm the fire had come near her house.

“I immediately told my family to vacate the house.

“The smoke was really thick and we called the firemen for help,” she said.

Roselind said open burning was no stranger to her as her family had to bear with it annually.

“Every year we deal with it. I do not see an end to this as it looks like these people are above the law,” she said.

Roselind called on the authorities concerned to take immediate action to stop irresponsible open burning “otherwise our skies will be blanketed by haze again”.