[size=150]Now that the latest motherboards featuring the Intel P45 chipset have been released, the questions on which one performs best have started. For some, the feature set will ultimately make the final determination on which one to purchase. Others will base their purchases on price regardless of performance or feature set. Then there is the enthusiast, for whom the only thing that matters is performance and the ability to reach insane clock speeds on the processor and memory. Some boards have it and some dont. It is the ability to reach the maximum speeds that your hardware is capable of, CPU or system memory.

Using the Intel P45 northbridge chipset and the Intel ICH10R southbridge, the MSI P45 Platinum is one of these latest releases and is part of MSIs Gaming Series of motherboards. Support is available for the latest Core 2 Duo. Quad core and Extreme 45nm CPUs, 16 gigabytes of system memory running at speeds of 1200 (OC)/1066/800. Supporting the latest enthusiast grade hardware, does the MSI P45 Platinum have It?[/size]

Closer Look:
[size=150]Any of you who have used the RyderMark benchmark might recognize the character on the front panel of the box. If it’s not the character it looks darn close. The front panel shows the 45nm compatability, Certification for Windows Vista and the DrMos features. The rear panel expands on the DrMos features, Green Power, Express Cool and Rapid Boost.[/size]

[size=150]The Circu-Pipe cooling system is a series of heat pipes that interconnect the heat producing components of the motherboard. Not much stands out from the crowd until you get to the northbridge heatsink. This heatsink sports five, yes five, heatpipes attached to a mini tower. Not only is it unique looking, but it works to keep the northbridge cool. The power supply circuits for the CPU are all sinked and feed the heat into the system for dissipation.[/size]

[size=150]MSI Advanced Live Update Online
[/size]
* The MSI Live Update online is designed to automatically download and update the BIOS and driver when theres a new version online. It helps reduce the risk of getting the wrong file and minimize the trouble of searching the files from MSI website.
Dual Core Center
* Key components status hardware monitor.
* Monitor the Dual Core CPU each unit status.
* Optimize System status define.
* Auto speed up with system loading change.
* live_update_3 standard: Live Update 3 is a single utility software that automatically checks BIOS, driver and utility updates and installs for you , which can save your time for searching and lower the risk while updating.[/spoiler]

[size=150]Crysis is a new addition to the gaming benchmark suite used at OverclockersClub.com. This game is one of the most anticipated and system intensive games on the market right now. The Crysis single player demo includes a GPU benchmark to test the performance of the video card installed in the system.
[/size]
[size=150]Settings:[/size] 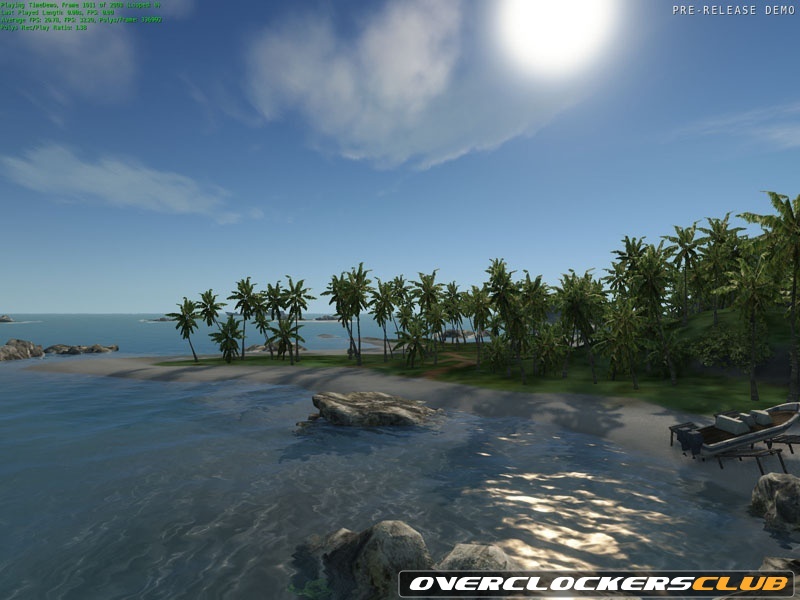 The performance of the P45 Platinum at stock speeds does not quite rival that of the X48 based comparison board. Where it really shines is when it comes time to push the clock speeds. This board, in no uncertain terms, allowed me to reach the highest FSB and core speeds of any board I have tested with my Intel Q9450 at 515 FSB and 3920MHz. For a quad core CPU it seems the stars need to be aligned just right to get to and through the 500 FSB plateau. The MSI P45 Platinum reached this plateau and pushed even further than I thought was possible with this chip. I had booted at 500 FSB before, but never was able to gain enough stability to get into the operating system, much less run benchmarks. 500 FSB? No problem! Run benchmarks? No problem! Awesome! Any time the settings deviate from the stock settings on a motherboard there is the chance that it will not boot. On many boards this requires a CMOS clear to get back to the baseline default settings. Just about all of the times I pushed a little too hard all that was required to get back to square one was a simple shut down and reboot. MSI has made the failed overclocking recovery an almost pain free proposition. Almost pain free because the Clear CMOS button on the I/O panel came in handy more than once.

Part of the performance equation with any board is the ability to shed the heat generated by the power regulating components and the chipsets. Over the past few years the predominant solution for enthusiast class boards has been the interconnected heatpipe system that connects all of the heatsinks together to work as a system. MSI has offered a unique look and solution to the heat problem with the Circu pipe system. Five, count them five, heatpipes terminate in finned assemblies over the northbridge and effectively shed the heat generated by the board. The airflow flowing across the finned coolers from the CPU cooler was sufficient enough to keep the assembly from getting too warm. Nice work considering some of the cooling solutions here lately have become so hot that an additional fan was required to keep the heat in check. At 189 dollars, you have a board that falls well under the $350 and up premium that performance boards have been priced at these past few months. If you take the feature set, the performance, overclocking potential with a quad core CPU, then consider the pricing (as low as $159 after rebates) the MSI P45 Platinum is one heck of a bargain.[/size]

All information on this motherboard was provided by MSI @http://global.msi.com.tw/index.php?func=proddesc&prod_no=1479&maincat_no=1

1st time got this review at MC.NET

how to say first time?

i mean the review about hardware.

Please provide a link to the source.
http://www.overclockersclub.com/reviews … _platinum/

tomolo 9 am at imperial mall where…? the stage there…?

imperial only got stage there can display . Other places at the ground floor for sell food and drinks.

if got free gift, sure whole bunch of MC.NET kaki will go.

All information on this motherboard was provided by MSI @http://global.msi.com.tw/index.php?func=proddesc&prod_no=1479&maincat_no=1[/quote]

u doing the roadshow? can we attend?

not at the stage then at the function hall?

I’ll be there… see u guys tomorrow :mrgreen:

its for free right?

At 5th Floor, 9am start. It’s at your right when you come out from lift. You’ll see their MSI banner.

only for the morning…?