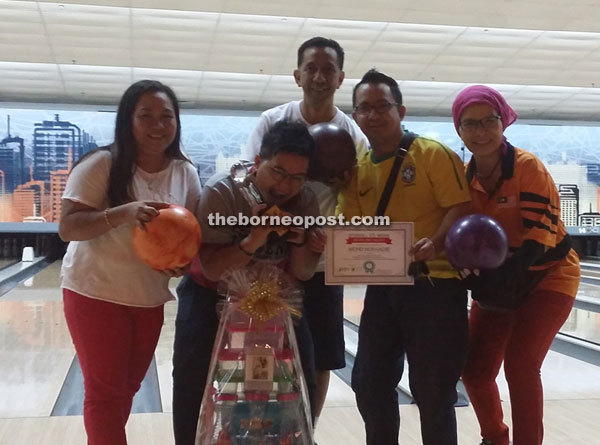 The ‘Lung Kang 1’ team (from left) Rosemaria, Margaret, Norhadie and Cecilia. Mohamad is at the back row.

Players in the team called themselves ‘Lung Kang 1’: Mohamad Abdullah, Cecilia Sman and Margaret Ringgit of The Borneo Post and Norhadie Sahari and Rosemaria Buma of the Utusan Borneo.

The tournament was organised by Interhill and Interhill Employee Club to foster rapport between the staff of the company and local media practitioners. It was also to promote bowling and encourage the people to bowl as an exercise for a healthy body and mind.

Among those present was Pullman Miri Waterfront operations manager Howard Sloe Chai who officiated at the closing ceremony and presented certificates to each player and prizes to the champion team.

On behalf of NSJA, Thng thanked the organisers for inviting the journalists to the match.

“This is a good platform for interaction between the media fraternity, Interhill Group and Pullman Miri Waterfront. We hope to continue this string of ties for a symbiotic relationship for mutual benefit,” he said.

He was happy that NSJA made it to the winning line in the match, the first of its kind held here. There was also a lucky draw session with attractive prizes.