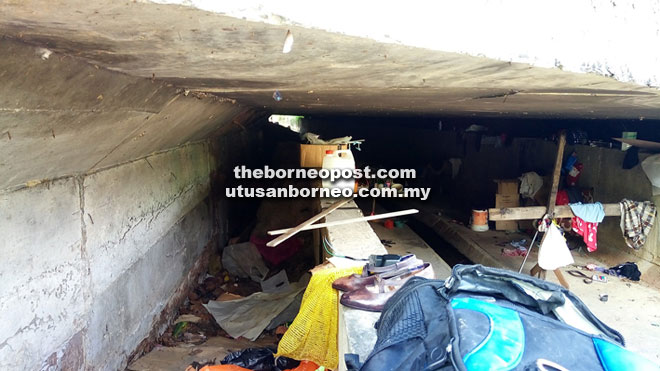 Pots and bowls including footwear and a bag inside the storm drain.

MIRI: Clothes drying on the concrete wall of a storm drain near Tamu Muhibbah here would attract anyone’s attention if one looks closely when passing by.

A check yesterday revealed a shocking truth – a few people believed to be a family had been living in the storm drain.

This is based on the clothes drying there, which included woman’s underwear and bra, t-shirts, long pants and woman’s singlet.

Also seen were a pair of shoes, a backpack and a bottle containing water.

Efforts to locate and identify individuals living in the storm drain were fruitless as no one was present during the check yesterday.

Apart from the clothes, there were also pots for cooking, bowls and plates including firewood used for cooking.

In July 2015, Mirians were shocked upon learning that a few people including a family of six had been living for months in the storm drain with no basic necessities such as clean water and electricity.

Their plight received attention from the authorities after it went viral when concerned Mirians who spotted them living by the storm drain posted their pictures online.

The storm drain is about two metres high and three to four metres wide.