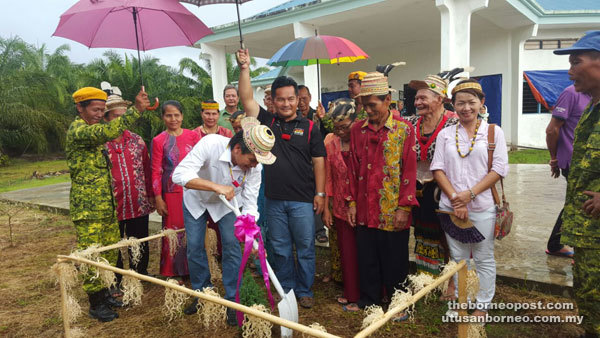 Dennis planting a tree in the new church compound as a symbol of the commitment of the building committee to embark on the next phase of the church’s construction.

MIRI: The rural folks of Telang Usan constituency were reminded to continue to uphold the ‘gotong-royong’ (work party) spirit which has been the backbone of development efforts in the longhouses.

Telang Usan assemblyman Dennis Ngau said the ‘gotong-royong’ spirit is the foundation of longhouse living in the rural areas despite the onslaught of modern day living,

“The ‘gotong-royong’ spirit had been part and parcel of our lifestyle particularly at the village level. Thus, we should keep this spirit alive among the villages regardless of our differences, be they politics or ideology,” he stated when visited the Roman Catholic Church of Daleh in Long Pelutan, Baram recently.

On the church itself, he said the building of the church through ‘gotong-royong’ began some 20 years ago. However, until today, the church building has yet to be fully completed, especially the interior, due to lack of funds.

“The villagers told me that they have carried out various fund-raising efforts for the new church building but the funds which they collected are not enough for them to carry out other construction works such as on the interior.”

On his end, he has also chipped in government funds to assist the construction works.

He then promised the committee to seek more funds for the next phase of the church’s construction in order to ensure the church is fully completed and ready before the annual Roman Catholic Easter gathering next year.

He said the new church has been selected to host the gathering in April 2018 with more than 20 Roman Catholic churches in middle Baram expected to participate.