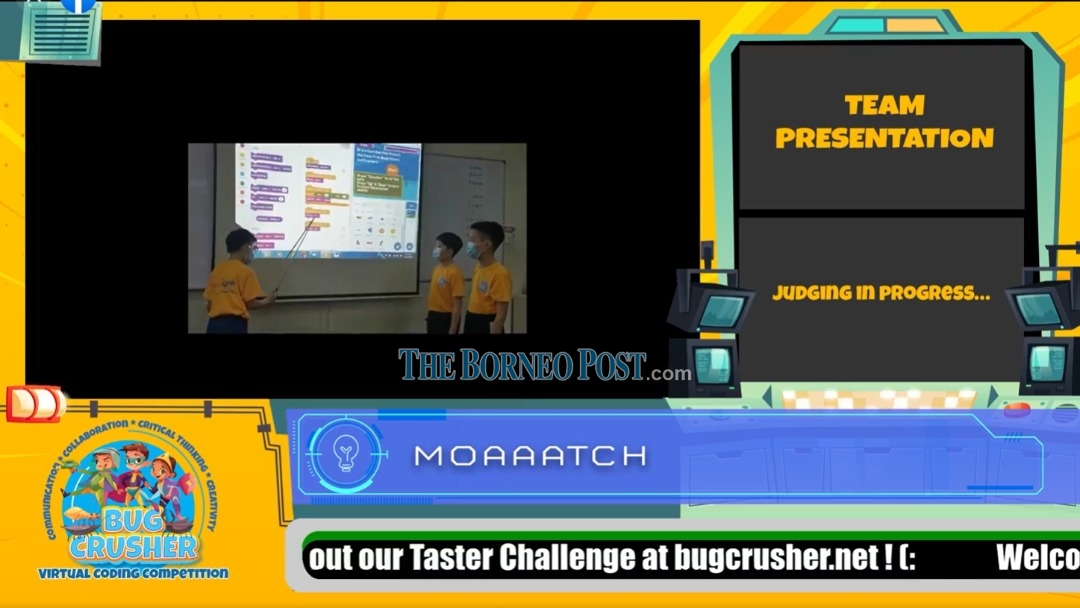 The members of Team MoAAAtch during their presentation.

MIRI (Dec 23): Team MoAAAtch of SJKC Chung Hua Bintulu has been crowned the champion of the inaugural junior virtual coding competition, Sarawak BugCrusher 2020 Junior Hackathon, bringing home with them the cash prize of RM1,500 on Dec 21.

The team beat the other 11 groups of primary school teacher-student teams in this competition that was jointly organised by Realfun Learning Centre and Sarawak Digital Economy Corporation (SDEC).

The competition drew pupils aged between 10 and 12 years old from Kuching, Bintulu, Miri, Selangau and Kanowit as they competed for a chance to win RM5,000 worth of cash and prizes.

In third placing was Team FutureMusk from SJK Chung Hua No 5, Kuching, which was represented by teacher Tan Mui Ping and pupils Lee Bob, Jason Lim and Tan Qian Qian

The founder of Realfun Learning Centre Teo Yuang Teck said he welcomed the good response received for the competition.

He said the competition was unique as teachers and students were heavily involved in solving the bugs, improving the programmes and recording their presentation in just three hours.

“It really put their collaboration, communication, creativity and critical thinking skills to test,” he added.

In conjunction with the competition, a separate challenge called “Taster Challenge” was also held for individual participants who did not manage to form their team.