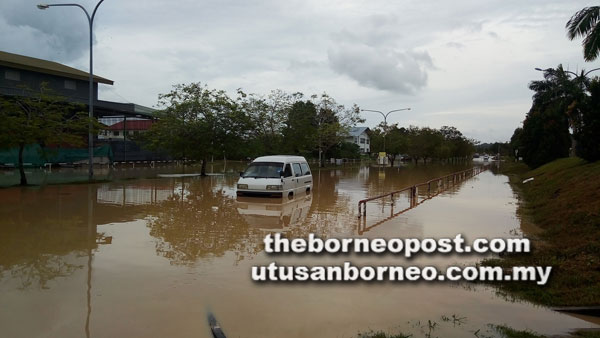 A van stranded in flood waters near the Sungai Dalam bridge.

Among the areas affected were Jalan Daro, Jalan Durin and Jalan Sibu.

A resident, who wished only to be known as Debbie, 20, said she could not sleep as she feared her house would be flooded.

“I was on guard as my parents are away. I had to look after not just my younger sister, but also the house in case the water level rose during the night. Thank God, the water level only increased this morning (yesterday).”

Debbie said she prepared for the worst by placing all important things in the house, including electrical appliances, in higher places.

“We basically learnt from our past experiences where in May this year, most of our important belongings such as our electrical appliances and carpets were damaged due to the flood waters,” she said.

She also moved her parents’ car to higher ground.

Fellow resident Anthony Ng, 45, said he moved his car at 6am.

“I was worried because the rain did not stop since last night. When I woke up today, I saw the water level had increased significantly, therefore I decided to move my car to my relative’s house,” he said.

The road heading towards Kampung Lusut in Taman Tunku via the Sungai Dalam bridge was also flooded and impassable to vehicles.

Road users were forced to make a U-turn to go through the old Miri-Bintulu road.