As the Chinese New Year celebrations get into their stride, inside sources have revealed how Abdul Taib Mahmud habitually exploits this annual opportunity to further squeeze his Chinese businesses cronies.

We have received extraordinary accounts of how the Chief Minister tours the big houses of Miri and Sibu each year, usually accompanied by family and grandchildren, in order to accept huge cheques and bags of cash from his dismayed hosts.

Taibs favoured partners from the Chinese community know they must continuously pay out in kickbacks and shareholdings if they want to receive favours and concessions at the expense of the state and the ordinary people.

According to top businessmen who have confided directly to Sarawak Report, an upfront cut for Taib himself must first be negotiated and paid into his bank accounts abroad. Next, the deal will also involve shares and positions for family members in the company which has gained the concession to cut wood or plant oil palm. In the case of timber, Taib also demands a further cut of 100 ringgit per ton, which adds up to billions of ringgit every year. After that there are the shipping scams, where chosen exporters again have to pay enormous kickbacks.

However, the towkays find the perversion of their Chinese tradition of Ang Pow a particularly unpleasant and greedy form of exploitation.

New Year of course is the time when Chinese like to treat their children and friends with presents and little red evelopes with cash. A visit to a friend during this period will hold the expectation that such a treat might be forthcoming at such a time. A generous gift would normally be a maximum of 50 ringgit. But Taib has made clear he expects bigger and better when he is the visitor involved!

One prominent businessman has confided how the Taibs accept these gifts as their right and the Chinese hosts know they must make the gesture if they want to remain in Taibs favour. Sarawak Report has learnt that this practise is regarded as particularly offensive by the businessmen concerned, because it is an invasion of their homes and hospitality, but they have no choice.

Another angry business leader told us this is just another way of making the Chinese bend low before the Bumis, to show who is boss. It is so greedy and disgusting.

Bomoh is bag carrier Nothing less than a million please!

We have also learnt from other sources that Taibs once-favoured Bomoh, Ahmad Suut, has also performed a role in conducting the Chief Ministers business on these occasions. The source tells us that the method is for Taibs secretary to ring the Towkay about a day in advance to ask how much Ang Pow will be provided if Taib were to favour them with a visit during his New Year progress.

The victim is left in no doubt, according to our insider, that nothing less than a million ringgit would be considered acceptable!

After the call the Chinese businessman is left having to make arrangements to draw the agreed sum of money in cash. The notes are then stuffed into a bag ready for the arrival of the Chief Minister. Our source, who is closely connected to one of Sarawaks wealthiest families tells us:

Clearly such obnoxious behaviour is entirely unecessary on the part of the Chief Minister, who is already a multi-billionaire. However, onlookers assume that his greed and opportunism drives him to take advantage of every occasion from which he can make profit.

It is considered that this inabilitiy to say enough is enough and his refusal to give up trying to suck each and every last penny from the people of Sarawak and their resources may well prove his final undoing.

Election pencilled in for mid-March

All the signs are that Taib has laid plans to call his election later this month to be held in mid-March. His agenda for the future of Sarawak, should he win, has now been clearly identified. First he plans to double the area of oil palm in Sarawak from one million hectares to two million hectares and second he plans to displace a further 600,000 native people as part of his project to build 12 more dams like the disastrous Bakun project.

This rapaciousness may very well at last turn the patience of the long-obedient longhouse folk against him. The opposition PR coalition led by Native Land Rights lawyer, Baru Bian, have made plain they will prevent these disasters if they take power and they will give back the stolen land to the native peoples. They will also chase Taibs stolen money to pay for water, electricity and roads for the people. Now the voters have a real choice, Taibs confidence that he can always strike fear into the people and secure their vote may this time prove unfounded.

Meanwhile, towkays who see the Chief Ministers number appearing on their phone screens over the coming week would do well to remain unavailable during New Year, otherwise their bank notes will surely be adding to the Taibs 2011 Ang Pow treasure trove!

That’s not all. Have you guys seen this “Dewan Speech delivered on 4.11.2010 touching on CM’s family’s wealth and Sarawak Report”?

My question is, what has the government done regarding this?

bro shuwenteo, he the white IS the big G

I been thinking, do he use his Rolls Royce go to Lapok?

this is more interesting… 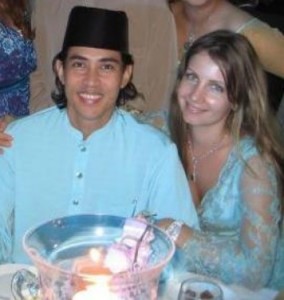