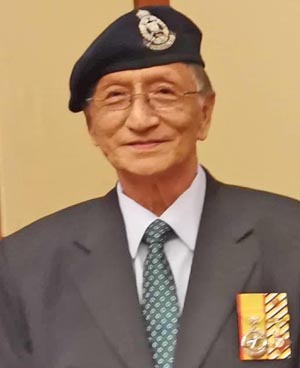 He said Malaysia has lost one of the finest and bravest war heroes in its history with Ngalinuh’s passing on Tuesday.

“You may have left us but the memories of you will never be forgotten,” he said in tribute.

Ngalinuh passed away at the age of 79 at Miri Hospital following a long illness.

Kiong added he wished they had met up more often, but said it was nevertheless a privilege to have known Ngalinuh and his family during their brief encounters at National Day celebrations in Kuala Lumpur in the 1980s when war heroes were honoured.

Sharing the family’s sadness and sorrow, Kiong said he and Ngalinuh shared a sacred bond of being a rare breed of national war heroes and recipients of the SP – the highest gallantry award in the country – and having served in the Royal Malaysia Police.

Kiong added they were humbled to have served their beloved country with honour and dignity during the troubled early years of Malaysia as comrades.

“Although we were miles apart fighting our country’s common enemy, the communist insurgents during the second emergency in the 1970s and 1980s, we were one in strong spirit and aspiration to bring about peace and security to our beloved nation,” he said.