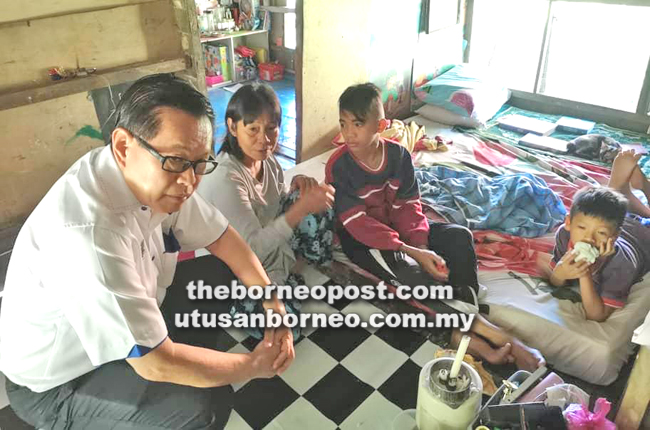 (From left) Lee obtains information from Amah during the visit.

MIRI: The Sarawak United People’s Party (SUPP) Senadin branch strives to help a single mother who has been living in a makeshift hut near Kampung Lopeng Tengah here, together with her stepson and grandson, for the past several months.

It is reported that Amah Saini, 42, was living with her daughter in Pujut Adong area here before she moved to the hut, said to have been built on a private property.

It is not immediately known why she moved out from her daughter’s house.

It is also learnt that Amah’s husband passed away three years ago Yesterday, Assistant Minister of Tourism, Arts and Culture Datuk Lee Kim Shin, who is Senadin assemblyman, led officers from Miri Welfare Department as well as members of Kampung Lopeng Tengah security and development committee (JKKK) during a visit to Amah’s hut.

According to Lee, it was not the first time that the woman’s plight was highlighted.

“I remember that the Welfare Department did make the necessary arrangements for her family a few years ago, back when her husband was still around.

“I also remember the case where her family was among those living underneath a bridge along the main road next to Tamu Muhibbah,” he said when met after the visit.

On welfare aid, Lee said the Welfare Department had approved Amah’s application, but it was difficult for the department to get in touch with her.

“The Welfare officers had gone to visit her based on the address that she gave them, but she was hardly around.

“Amah has no bank account, but some arrangements have been made to assist her on this matter.”

During the visit, Lee advised Amah and the two boys to either live with her daughter, or to move back to Amah’s home village Kampung Sebalik at Tiris in Bekenu — she chose her daughter.

“Her daughter also agreed with the suggestion, in that to prevent her mother from becoming a squatter on a private land.

“We (SUPP) will make arrangements, including the transportation, for her to move back to her daughter’s house,” he said.

It is learnt that Amah’s stepson, aged 12, is ‘stateless’ – he is without any identification document.

Her grandson, aged 15, has stopped going to school.

Regarding this matter, Lee said arrangements would also be made to ensure that both boys would receive proper education.