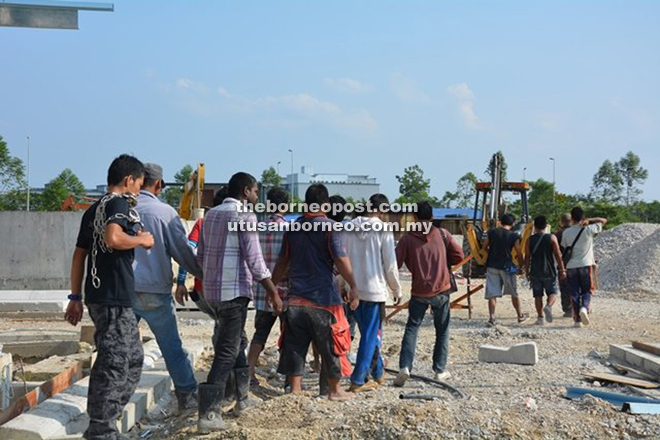 Illegal immigrants arrested during operations carried out by the State Immigration Department.

KUCHING: Around 13 Suluks from the Philippines were among 69 illegal immigrants arrested in operations by the State Immigration Department statewide.

On the arrests, he said on Sept 2, the Immigration Operation Unit in Miri raided a location in Kampung Jagus, Lambir where checks were conducted on 18 individuals, out of which 13 Suluk were arrested under Ops Pintu.

“They comprised two men, four women and seven children. All were arrested under Section 6(1)(c) of the Immigration Act 1959/63 for failing to present valid travel documents to remain in the State and they have since been sent to Bekenu Immigration Detention Depot for investigation,” he explained.

In Sibu, an Indonesian man was nabbed during a check of food premises at Lorong Keranji, off Jalan Keranji by officers from Sibu Immigration Office Operation Unit.

He said in the operation led by immigration deputy assistant director Ibrahim Marzuki, the illegal immigrant was arrested on suspicion of violating Section 6(1)(c) of the Immigration Act 1959/63 by not having valid travel documents.

“This man was detained at Sungai Merah Sibu Police Station for further action by Immigration.”

In another incident in Kuching, 52 illegal immigrants were arrested in two operations conducted on Sept 2 and 3.

“The first location was a construction site at Jalan Keruing, Sejingkat where they checked 86 individuals including 25 Malaysian men, 33 men and a woman from Indonesia, nine men from Korea and a Filipino man.

“Of this figure, 10 Indonesian men were arrested under suspicion of violating Section 6(1)(c) of the Immigration Act 1959/63 for failing to present valid travel documents, Section 15(1)(c) of the same Act for overstaying in the State upon expiry of the social visit pass as well as Article 11(7)(a) of the Immigration Regulations 1963 for violating the terms of the social visit pass,” he said.

At the second location of the operation at oil palm quarters in Sempadi, Lundu, 68 individuals were checked, resulting in the arrest of 42 Indonesians.

In another operation, Immigration together with the Malaysian Anti-Corruption Commission (MACC) checked a factory at Kampung Sandong here and arrested three Indonesian men on suspicion of violating Section 6(1)(c) and Section 15(1)(c) of the Immigration Act 1959/63.

All those arrested have been sent to Semuja Immigration Detention Depot in Serian for further action by Kuching Immigration Enforcement.