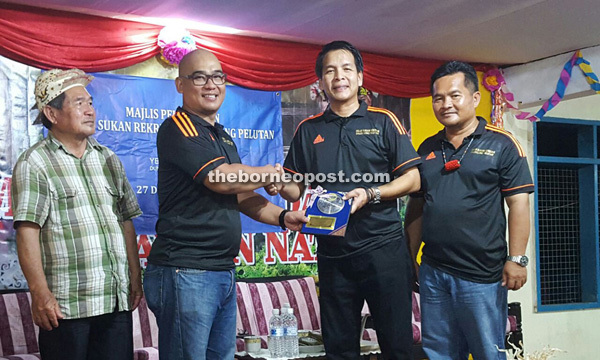 Andrew (second left) presents a token of appreciation to Dennis as Tingang (left) and an unidentified person look on.

MIRI: Every great achievement in a community, be it at the longhouse, state or national level, begins with thinking and setting big goals.

Telang Usan assemblyman Dennis Ngau, who stated this, said as an individual or in a group like an association, when they think big they get really excited and thinking of achieving or doing something big gives energy to pursue their dreams.

He said by voluntarily joining the association as a member allows them to develop a social network to improve their life.

“Having more friends and relatives is much more likely to put a smile on your faces and the existence of social relationship itself may improve your happiness.

“This is the structural effect of social networking on you through your involvement in associations or clubs,” he said.

Another benefit of being a member of a recognised club or association, he pointed out, is learning and acquiring teamwork.

Dennis urged the club’s office bearers to foster and develop community cohesiveness among members and align the club’s structure, objectives and activities to the longhouse leadership.

Being a youth club, he said there are possibilities for them to be future leaders of the longhouse or the community.

“Woven together into a seamless set of basic beliefs, the spirit of teamwork, friendship and initiatives can infuse entire organisations with a success generating paradigm, a powerful force for growth and positive change in your community life,” he pointed out.

Dennis also suggested that the club organise sports and cultural events in the middle of Baram involving longhouses from Long Laput to Long Liam Keliman.