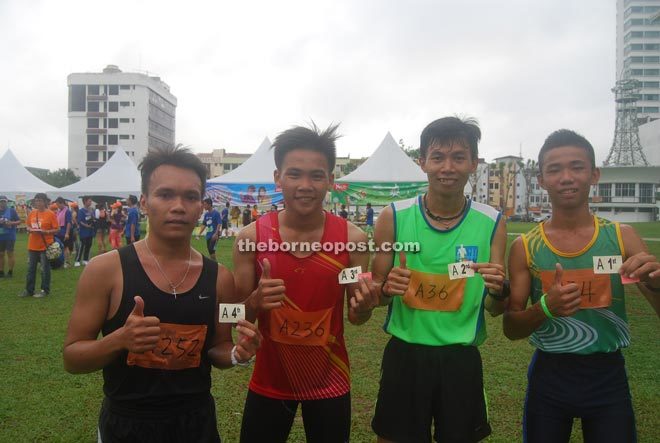 (From right) Husan, Yong, Havit and Nelson Jungan – who finished fourth in the 8km Men’s Open category – gather for a group photo after the race.

SIBU: It was a pleasant surprise for 16-year-old Husan Hasing when he finished first in the 8km Men’s Open category of the 5th BP Run 2015 here on Sunday.

The boy was clearly in a buoyant mood when met by The Borneo Post after the race at Sibu Town Square.

“I believe I could have registered a better time – if given the push. Nevertheless, I’m happy with the result,” he said, adding that he had earlier expected fierce competition from two-time champion Havit Philip of SMK Kapit.

Havit set the pace early in the race, with Husan trailing closely behind.

However, the circumstance turned in favour of Husan when Havit began to show signs of fatigue past the 2km mark.

“When Havit slowed down, I knew that the title was mine to take.”

Havit, on the other hand, admitted that he had not been training regularly as he was spending more time on his studies.

“I’m still happy to have finished third. At least, I’m not going home empty-handed,” he smiled.

As shocked as he was with the outcome, Husan is not a newbie when it comes to long-distance running.

He also triumphed in the Inter-Division 5,000m and steeplechase events held earlier this year.

The Form 3 student said the race was a venue for him to gauge his own standards.

He added that he had been training regularly under coach Ling Ngie Ming in his pet events, which also included the 400m and 800m run.

Earlier this year, Ming Shen clinched a gold medal in the 800m event, as well as a silver medal in the 400m at the Sibu Division Track and Field championships.

Last year, the young runner could only manage fourth place in the 4km Fun Run, attributing it to not having enough preparation.

‘This year, I am coming for the title and I am happy to win it,” he enthused.