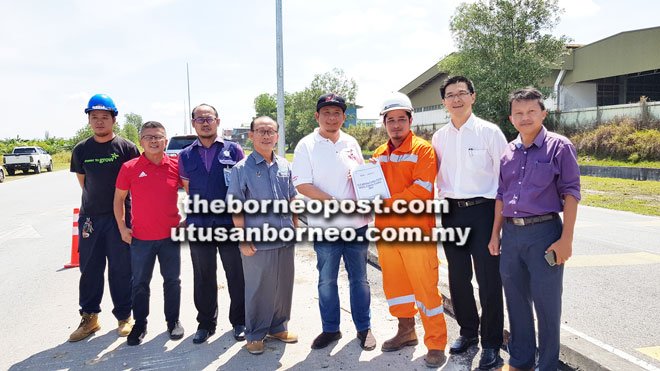 Lukanisman (fifth left) holds a plan for the street light during a site visit at Taman Tunku bypass.

MIRI: Road users of Taman Tunku bypass here can breathe a sigh of relief as the street lights will be operational within the next two months.

According to Sibuti MP Lukanisman Awang Sauni, a total of 72 street lights are currently being installed and once completed, it will ease the journey of road users which has been an issue since the opening of the road in 2012.

“This is the first Rural Transformation Programme (RTP) project for Sibuti constituency which costs RM350,000 and was approved last October.

“I would like to clarify that the delay in this project is not due to the air traffic matter since the road is near the airport whereby some unfortunately think the street lights will interfere with the planes landing but that is not the case. It is actually because we are waiting for the budget.

“Each assemblyman and MP is given RM5 million RTP allocation and I have allocated funds for the first phase of this project and the project will be extended to other areas under my constituency. For the second phase, we will add more street lights at Taman Tunku, Kampung Lusut and Lambir, including Bakam, Bekenu and Niah. The projects will be implemented by Miri City Council (MCC) and Sarawak Energy Berhad (SEB),” he said during a visit to see the progress of the street lights along Jalan Miri at Taman Tunku yesterday.

Commenting further, Lukanisman said another project under his RTP is building a park, jogging track and futsal court near Jalan Daro/Jalan Kuching in Taman Tunku.

“There are a lot more projects that are planned to benefit the community and among them are the new Lusut No. 2 bridge and we are also planning to build a multipurpose hall for Taman Tunku,” he added.

Joining the MP during the site visit were representatives from MCC, SEB and local councillors.