Stop foreigners from peddling their trade in the state – NGOs 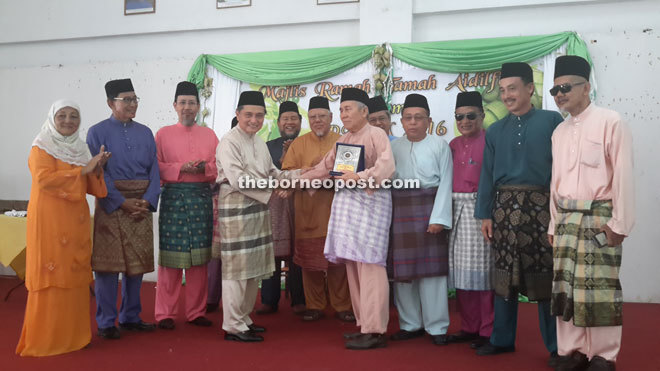 Abdillah (fourth left) giving a memento to a long-serving PJMM member as other members look on.

MIRI: Foreigners especially Pakistanis and Indonesians should be barred from indulging in business activities in the state, suggested non-government organisations (NGOs) here.

They argued that besides competing with locals for jobs, the foreigners deprived locals of business opportunities.

Sarawak Bumiputera Entrepreneurs Chambers (DUBS) Miri branch deputy chairman Julani Mokhtar said there were many complaints that Pakistanis and Indonesians were running retail outlets, operating in tamu (markets) and going house to house to sell carpets and other things including hand phones.

“Nowadays, foreigners are seen competing with locals in running various businesses all over Sarawak and selling carpets, etc, including hand phones house-to-house, which must be put to a stop,” Julani told The Borneo Post during a Ramah Tamah Aidil Fitri with Persatuan Jatti Meirek Miri yesterday.

Julani, who is also PBB Lambir deputy chairman, said he saw no reason for allowing Pakistanis and Indonesians to run business activities here as they were competing with locals.

“We do not know if they have any business permits to operate their business; worst still they can be seen riding motorcycles or driving cars in the rural areas to peddle their trade,” he said.

Known by Ibans as ‘Sabat’, he said the Pakistanis would charge high interest rates on the things they sell even without down payment.

Jatti Meriek Miri vice-president Rosiah Ali feared that if the trend is not stopped Sarawak would be like Sabah where foreigners dominate many business sectors.

“We are not against Pakistanis or Indonesians but only voicing our concern that they will deprive locals of business opportunities,” she said, adding that many Jatti Meriak small-time entrepreneurs depended on such business.

“I am curious how these foreigners can do business in the state as most of them come to Sarawak on visit passes,” she bemoaned.

Sharing the same view, Penghulu Kallang Ami from Ulu Teru suggested that the authorities stop the Pakistanis from peddling their trade in the longhouses.

He cited cases in the remote areas of Marudi and Telang Usan constituencies where they sold their products at prices 100 per cent higher.

PBB member Hasnan Ahmad hoped the enforcement agencies would monitor them and check if they overstayed in the state.

Meanwhile, in Sabah, Bingkor assemblyman Datuk Jeffrey Kitingan wants all Pakistanis out of the state.

He sees no reason why they should be given special treatment by the Immigration Department when even visitors from Asean are allowed only 30-day visit passes, Malaysians from the peninsula get 90 days and some are even banned from entering the state.

Foreigners, he stressed, should be banned from certain areas in the economy which can be handled by locals.

“It’s not in our interest to allow foreigners to run everything.”