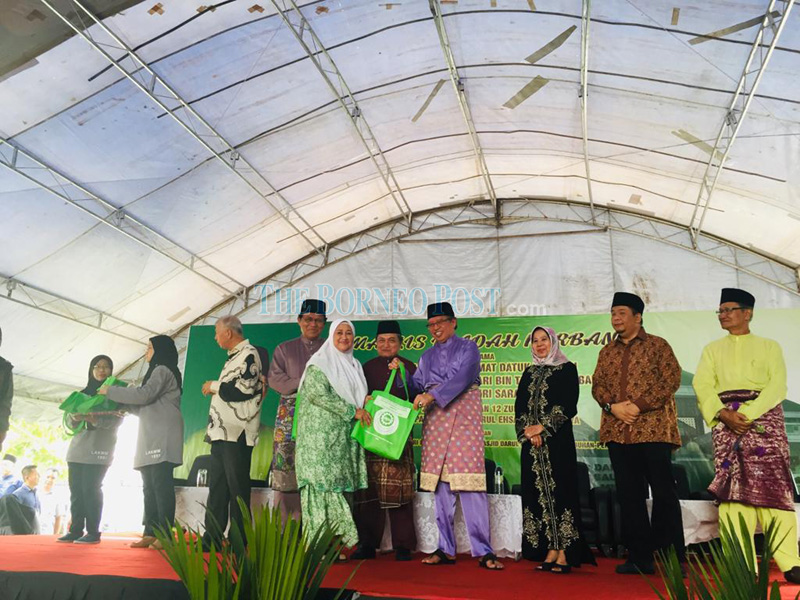 Abang Johari presents sacrificial meat to a recipient during the Korban programme.

MIRI: The Sarawak government views the haze situation seriously and will take all necessary actions to contain it and minimise its impact on human beings.

Chief Minister Datuk Patinggi Abang Johari Tun Openg said this when expressing concern on wildfires in Kuala Baram that had been producing thick smoke that blanketed the city and the outskirts and even up to the border town of Kuala Belait in Brunei.

He also expressed concern on the trans-boundary haze caused by open burning in a neighbouring country.

“It is the same phenomenon every year in Sarawak due to forest burning in our neighbouring country,” he said.

He said that Deputy Chief Minister Datuk Amar Douglas Uggah, as chairman of the State Disaster Management Committee, was having a meeting here yesterday afternoon to address the haze situation.

He said after the meeting Uggah would visit various areas where peat and bush fires are burning.

Speaking on Hari Raya Aidiladha, he said it is a time for Muslims to remind themselves of the spirit of ‘Korban’ (sacrifice) and forgiveness in order to be close to Allah as demonstrated by Prophet Ibrahim when he was willing to sacrifice his son Ismail in obedience with Allah’s command.

“Korban teaches us to be kind and mindful of our neighbours’ needs through our sacrifice of time and by giving and sharing,” he said.

He added that Muslims must always have the spirit of Korban if they want to progress and achieve success.

The Ibadah Korban was organised by Miri Malay Charitable Trust Board (LAKMM) in collaboration with Darul Ehsan Piasau mosque and Muslim NGOs in Miri.