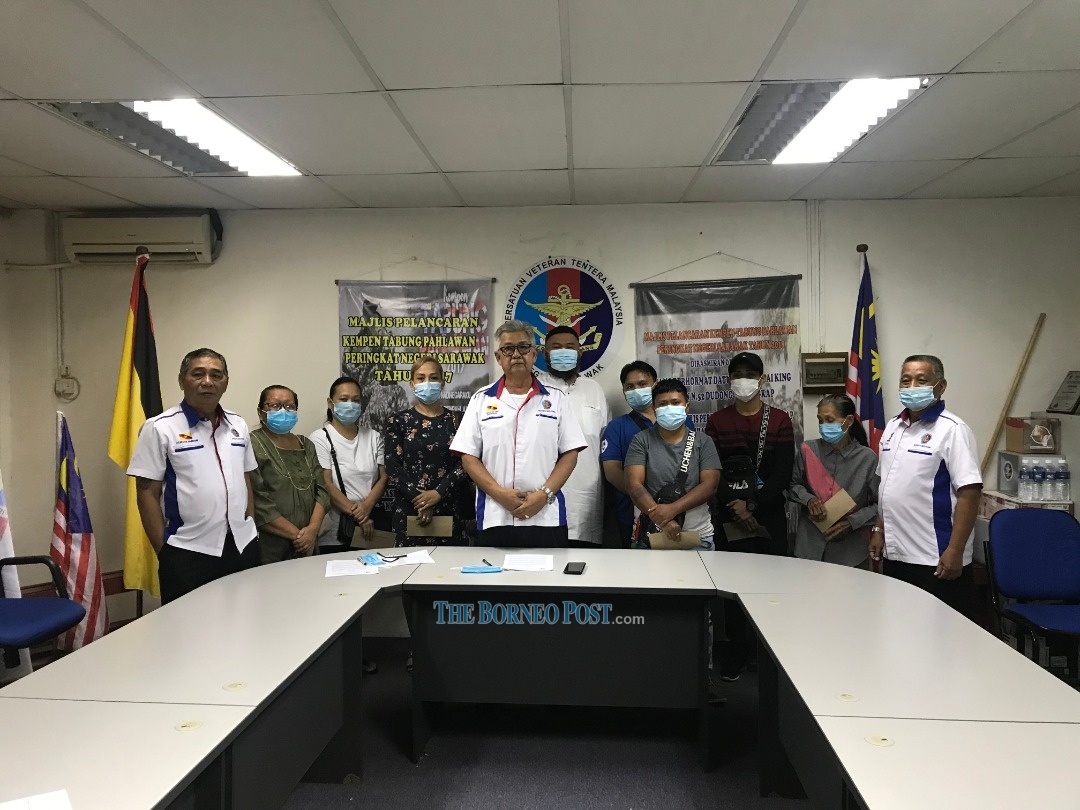 Nambang (left), Yeo (fifth left), Ayob (right) at a group picture with the deceased members’ next of kin.

President Francis Yeo said this was in consideration with the increasing cost of living.

“I will forward this request to JHEV and I hope that the government could consider this request,” he said this at the press conference today.

According to him, the association helped the next of the kin of the deceased members to apply for such assistance from the government.

He said the next of kin would receive the assistance of RM3,000 from JHEV.

Apart from the RM3,000 assistance, he also said that the association took another initiative to provide another RM200 assistance to the next of kin.

He said the RM200 was from the association’s own fund.

He said the assistance was part of the fund collected from the Warriors’ Fund organised nationwide last year in conjunction with Warriors Day Celebration.

“Every year, we will receive permit from the Ministry of Defence to go around the town to ask for the donation for the Warriors’ Fund.

“Whatever, we have collected, we will send it back to JHEV and the department will distribute the fund collection to every association. We use the fund that is being given to us for our welfare, not just this death compassionate assistance,” he said.

He presented the RM200 assistance to the next of kin of the 10 deceased members today.

He said eight recipients are from the central region, one from Kuching and one from Miri.

He said the association would always do its best to give such assistance to members’ next of kin.

“We will always do our best, if we can afford, we will give such assistance immediately, if not, we will delay a little bit, but we will definitely pay them,” he pointed out.

He also said that as a non-governmental organization (NGOs), SVAFMA did not have fixed income.

He said the income either comes from JHEV and minor rural project (MRP) from the government if there are any.

He also said that every year on July 31, the government would launch the Warriors Day Celebration.

However, for this year, there is no news whether there will be any such celebration and Warriors’ Fund collection.

Meanwhile, he said he would visit the members in Miri on Aug 8. He also urged veterans to register themselves to SVAFMA as members.

He said currently, SVAFMA has over 3,000 members throughout the state.