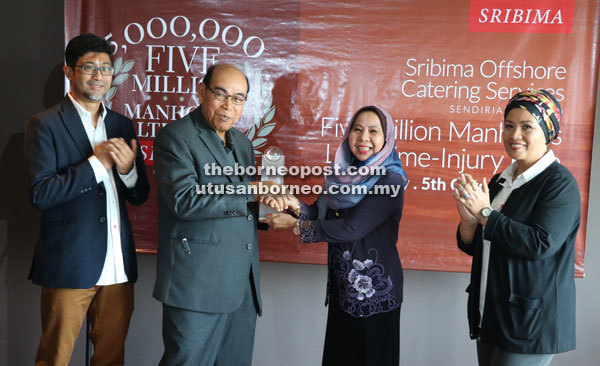 Rosey presenting a plaque for clocking 5 million cumulative working hours without injury to Ibrahim in the presence of Yus and Diana Ibrahim, director of SOCS.

The latest achievement was clocking 5 million cumulative working hours without any lost-time injury.

Its chief executive officer, Yus Osman, said the achievement came seven years after the last two accident cases in 2009. As of September 2016, they had accumulated 5.2 million hours.

“This is not a feat many companies are able to accomplish, but we are exhilarated to be among the few to do this.

“We are not here to gloat over this accomplishment, but we want it to motivate us – all of us – that it is possible to work safe if you put your hearts and mind to it,” Yus said at a cocktail gathering to celebrate the achievement at a hotel in Miri yesterday.

He mentioned two incidents in 2009: one a property damage and the other involved a cook who scalded himself while performing his duties.

He made them embark on concerted efforts to achieve the incident-free man-hours.

He said the task was challenging as the crew came from various walks of life with different inclinations and academic background, but perseverance paid off.

“They want to ensure our crews return to their families the way they joined us to push us to instill the safety culture in the minds of our people.

“There were breaches, of course, but we don’t believe in pointing the finger at one party. We, the management team, are partially accountable for the breach,” he stressed.

Ibrahim, who also spoke, attributed the success in achieving the over 5 million cumulative working hours without lost-time injury to the strong support and commitment of all his staff.

He hoped they would uphold the feat for the benefit of all.

SOCS was set up in 1983 in Miri to provide quality cost-effective catering for the petrochemical industries in and outside Malaysia.