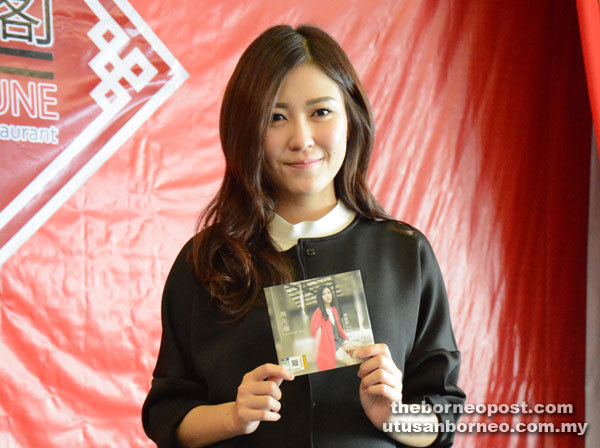 Singer Jyin Poh, in Miri last weekend for a new album signing session with her fans.

MIRI: ‘When life throws you a lemon, make a lemonade out of it’, is what Jyin Poh have learnt from her 10 years of experience in the entertainment industry.

Gifted with a sweet and sultry vocal, Jyin Poh rose to fame after finishing as a Top 5 finalist in the Astro Talent Quest in 2007, but had a bumpy six years in her singing career before successfully releasing her latest album, ‘Somewhere After’ this year.

Revealing this at a press conference on Sunday, the Johor lass is thankful for her new recording company and more importantly, her fans for believing in her.

“Right after the singing competition, I was directly signed to a recording company and soon after, released my first album. I had to admit that the smooth sailing start to my singing career was a little ‘too comfortable’ and I forgot to prepare for any possible risk.

“Four years later, my company got into financial problem and two of the six recording artistes were deprived of the opportunity to continue our contract(s) and I was among the unfortunate two.”

Over the past six years, Poh added, life taught her a lot about hard work and perseverance.

“I took some time to shrug off the feeling of desperation and fear, to work on composing songs, getting odd jobs singing at pubs and lounges. Slowly, my confidence built up and I told myself that the opportunity for me to release my second album would eventually come,” said Poh who was here last weekend for an album signing session with her fans.

Her new album, ‘Somewhere After’, tells the story of her experiences and the message she wished to share with her fans.

“Life may throw you a lemon, but it is in your hand to either let it turn rotten or turn it into a nice lemonade. I am glad that I chose otherwise,” she said.

The album signing held on Sunday at Bintang Megamall Miri was the first stop of Poh’s new album’s nationwide promotional tour and Miri was the only stop in East Malaysia.