‘Society’s future decided by contribution of its youths’ 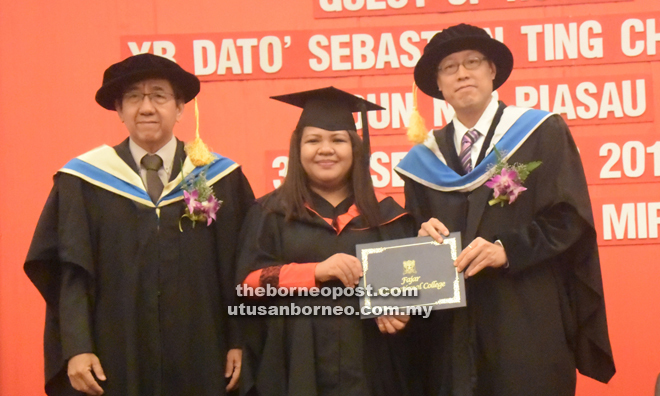 Nur Izzati receiving her diploma from Aries (right) as Tham looks on.

MIRI: Graduates of Fajar International College are a pool of well-trained human capital that will contribute to society’s development.

“We at Fajar College believe that the future of our society will be decided through contribution of youths, especially young graduates who are able to give their best with full enthusiasm,” said Tham.

According to him, the college plays important roles in producing young graduates equipped with professional skills and able to contribute to social development.

He said Fajar College recently opened its own campus in Sevenew and he hoped students would benefit greatly from the full-pledge campus equipped with state-of-the-art facilities.

“In fact, our graduates here are fortunate to have spent their final few months in our new campus,” he said.

“Our DipOSH is not only a path to a bright future but provides a unique pathway to earn internationally recognised degrees from a prestigious UK university.

“Our graduates in OSH are able to further their studies at our partner university – Middlesex University London in just one academic year,” he said.

For the Diploma in Accountancy graduates, Tham said most of them had landed jobs in the field. He hoped they continue to degree level to become qualified accountants.

He announced that Fajar International College has tied up with a five-star Australian university to offer degree programmes in the college.

“This will open up another pathway for our graduates in accountancy, business studies and human resource management, allowing them to complete an Australian degree in Miri in a shorter time span,” he explained.

A total of 217 students received their scrolls at the graduation ceremony held at Imperial Hotel here.