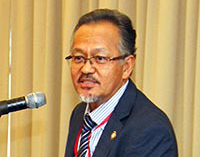 State Forest Department director Sapuan Ahmad, who made the announcement during the closing of the expedition at Long Banga in Baram yesterday, said proper studies had to be conducted to determine the groups or families that the plants belong to.

He said although it would take quite some time before the official announcement could be made, two of the new discoveries had been named after Tun Jeanne Abdullah, who is the chairperson of Tropical Rainforest Conservation and Research Centre.

The Tropical Rainforest Conservation and Research Centre has been showing its interest to foster cooperation with the state government on the protection and conservation of forest in Sarawak.

Four other species are yet to be named but there is a possibility that one of them will be named after former prime minister Tun Abdullah Ahmad Badawi, who closed the expedition.

The other three names under consideration are Assistant Minister for Resource Planning Datuk Mohd Naroden Majais – who is also Assistant Minister for Entrepreneur Development, Deputy State Legislative Assembly Speaker and Mulu assemblyman Datuk Gerawat Gala and Baram MP Anyie Ngau. A total 115 participants from various agencies, including those from institutions of higher learning in the country and overseas, took part in the 14 expeditions across Long Banga led by Datuk Prof Emeritus Dr Mohemad Abdul Majid.