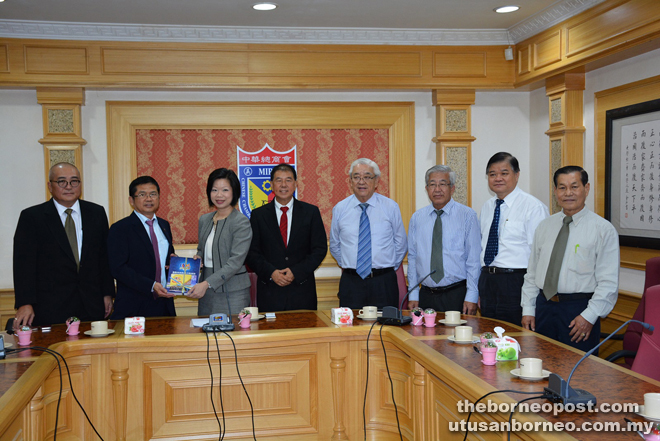 MIRI: The growing number of Singaporean companies venturing into East Malaysia in recent years proves that the region has vast opportunities and market potential to tap into and benefit from.

Hence, the Singaporean government is looking forward to explore more of East Malaysia, in particular its tourism landscape and potential business opportunities.

In saying this, Singapore’s Senior Minister of State at the Ministry for Trade and Industry (MTI) Sim Ann said Singapore is certain that there is room for greater collaboration between the Singapore Tourism Board (STB) and the Sarawak tourism authorities in boosting bilateral tourism ties for a win-win situation.

“Besides tourism, I understand that the Miri Chinese Chamber of Commerce and Industry (MCCCI) is also keen to exchange views on developments and opportunities in the agriculture, higher education and healthcare sectors.

“We will be delighted to hear more about the interests of the Miri-based businesses and learn how Singapore may be able to play a role in the exciting developments in these areas,” she said at a dialogue with the MCCCI at their office here yesterday.

She pointed out that while Singapore companies’ main investments had been concentrated in Peninsular Malaysia, a small but growing group of companies had ventured into East Malaysia.

Among the Singapore-based businesses that have already set foot here are Pezzo Pizza and Charles & Keith through franchising and joint ventures with local partners.

“In the area of infrastructure, Singapore-based OM Holdings owns and operates a metal smelting facility in Samalaju Industrial Park in Bintulu, and consultancy firms such as Surbana Jurong which has done master-planning projects for East Malaysian clients.

“Singapore-based Ascott Limited is also actively seeking opportunities across Sarawak and developing a new service apartment project that is slated to open in Miri in 2018,” Sim said.

Sim who is also Senior Minister of Culture, Community and Youth pointed out that Malaysia in general would remain the first port-of-call for Singapore’s Small Medium Enterprises (SMEs) expanding into Asia due to its geographical proximity and similarities in culture and language.

Meanwhile, MCCCI chairman Lee Khoi Yun said Miri has a lot to offer, especially in the areas of tourism.

Miri City mayor Adam Yii Siew Sang who was also present at the dialogue concurred that Miri has vast tourism potentials that should be tapped, saying the city is ever-ready to collaborate with other governments, especially Singapore.

“Miri needs an economic driving force and that is tourism. Singapore is in our minds because we share the same culture with Singaporeans. Therefore I am pretty sure that Singaporeans coming here would feel very much at home in Miri,” he said.

Yii also called on the Singaporean delegates who accompanied Sim at the dialogue to assist Miri in making the city a tourism spot.

“Apart from tourism, I am sure there are also other areas such as business opportunities that Singapore can assist us.

“It would be great if we could have more discussions and dialogue with their party in the near future,” he said.