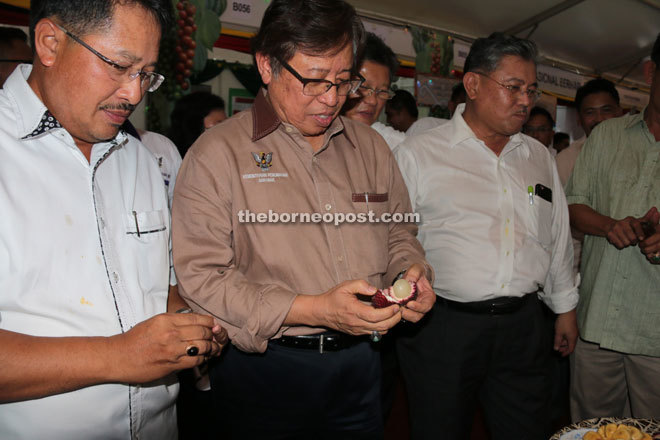 (From left) Misnu, Abang Johari and Morshidi help themselves to local fruits at one of the stalls.

SIBU: Tourism Minister Datuk Amar Abang Johari Tun Openg is happy with the great response received for the ‘Sejiwa Senada’ programme at the town square here, which kicked off yesterday.

The minister, who is in charge of the programme, said there was a slight difference and improvement in the edition here from the first-leg in Miri last weekend.

He was also happy to see that Sarawak Forestry Corporation (SFC) was displaying various tourism attractions such as national parks and wildlife centres.

“This is the focus of our chief minister — to preserve the environment.

“So I believe this is a good development from Miri,” he told reporters after visiting the booths here yesterday.

In citing the success of ‘Miri Kitchen’ launched in the previous Sejiwa Senada programme, which raked in RM1.2 million in just three days, Abang Johari believed the same concept could be done here.

“I believe there will be many visitors from Sibu and areas near Sibu coming for this event,” he pointed out.

On the programme, Abang Johari said the aim of Sejiwa Senada was to reach out to Sarawakians.

He said the state government had always been concerned and eager to help the people, especially during this time when the cost of living continued to rise.

“We have counters here, manned by government officials, where the people could ask for help or advice.”