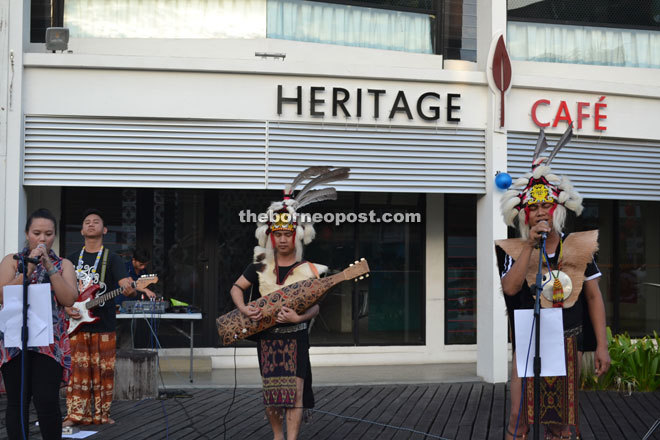 The Etnik Revolution Crew making their presence felt at Sibu Heritage Centre with a performance.

SIBU: Sibu Heritage Centre is inviting local musicians to join its busking event which will be held at the centre every first and third Saturdays of the month beginning in February.

According to the centre’s manager Thomas Ng, the one-hour performance from 6pm to 7pm is open to all races in Sibu Division including Sarikei, Kapit and Mukah, free of charge.

“All can perform anything such as from traditional, cultural to modern dances and music,” he told reporters during the warming up event at the centre here on Saturday evening.

Ng said the event initiated by STB and supported by Sibu Municipal Council (SMC) was due for trial for at least up to six months.

After that, he said depending on the response from the public and the buskers, it might be held regularly.

He said the main aim of the event was to encourage local performers or buskers showcase their talents.

He said busking which had started in Kuching and Miri, was very popular in Western countries such as UK, USA, Australia as well as Singapore.

“We will officially launch the event on Feb 6 and will invite the SMC chairman Datuk Tiong Thai King, his deputy Dato Andrew Wong and Angelina to carry out the official launching,” he added.