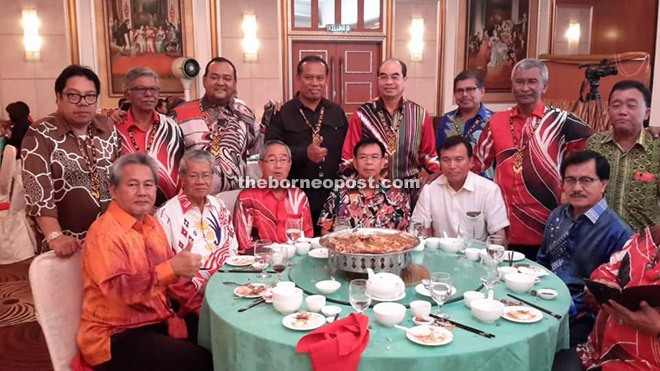 (Standing from fourth left) Saipolbahari, Entri and others in a photocall during the dinner.

MIRI: State Farmers Organisation (SFO) will build a palm oil mill on a 105-acre land at Sungai Laong in Bakong soon to allow small-time farmers to sell their oil palm fruit bunches direct to the mill with the best possible prices.

Its chairman Datuk Sylvester Entri said the farmers were now selling their produce to private mills at ever-changing prices based on their (farm) locations.

“With a mill specifically for small-time farmers, they will be able to get a fair price for their fruit bunches,” Entri said during a Raya gathering of National Farmers Organisation (Nafas) here recently.

According to Entri, the much-awaited mill would be a huge booster for oil palm planters in Marudi.

According to MPOB’s statistics, there are 3, 000 small-time farmers in the region and when the mill materialises members of Baram Area Farmers Organisation could also buy shares in the mill.

The mill project is a joint venture between LCDA, Nafas and Baram AFO.