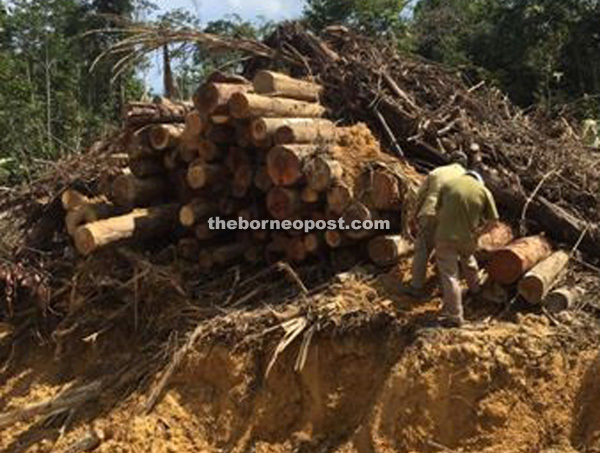 Photo shows how logs are being camouflaged to avoid detection from aerial monitoring.

The first was conducted on Tuesday afternoon involving team members from SFC Bintulu office, who managed to confiscate 293 logs – believed to have been illegally felled – at Sungai Segian in Ulu Sungai Labang along KM60 Bintulu-Miri Road during a routine patrol. The logs of various sizes and species were estimated to weigh 119 cubic metres in volume.

The second operation involved members of an enforcement team based at the One-Stop Compliance Centre in Mabong, who discovered an illegal logging operation at Nanga Belabut in Kapit also on Tuesday.

“The necessity to carry out ground patrols is clearly evidenced in the first case because the perpetrators had tried to conceal the ill-gotten commodity, especially from aerial monitoring, by placing small trees, branches and leaves over the logs.

“The second operation was set up following a public tip-off, where we were able to stop illegal felling of trees at an early stage. We counted about 100 tree stumps and found only five logs left behind after the perpetrators apparently made a hurried exit from the area.

“Although within a timber licence area, this operation is deemed illegal because it is located within an area that has not yet been approved for logging,” SFC said in a statement.

Police reports have been made regarding the matter and both cases have been handed over to the relevant authority for further investigation and disposal.