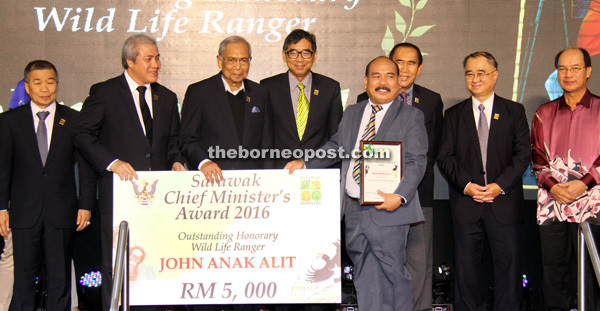 KUCHING: The Sarawak Forestry Corporation (SFC) has been asked to further expand its open policy for conservation.

“We must preserve our forest and develop it for the development of its downstream products. We should collaborate with international bodies and universities to further develop our timber and get the experts to tell us how our forests can benefit us more,” said Adenan during SFC’s 13th anniversary dinner on Friday.

He pointed out that as part of the island of Borneo, Sarawak is known among the international community for its rich and untapped biodiversity resources.

While international researchers have the expertise in conservation and development of downstream products, they lack the raw materials, he said.

Adenan said indexing the state’s forests would be a gigantic task that cannot solely be done by locals.

“By working together with international bodies, we can also make a name for ourselves in the international level among well-known institutions,” he said.

“That is why we must stop logging. Enough is enough, the state government is not going to issue any more licenses except to clear land development for plantation under NCR (Native Customary Rights), by Salcra (Sarawak Land Consolidation and Rehabilitation Authority) and Felcra (Federal Land Consolidation and Rehabilitation Authority). There will no more land to development for plantation for the private sector,” he added.

He stressed the state would increase its Totally Protected Areas (TPA) and continue stringent enforcement against illegal logging.

Adenan also commended SFC for its tireless efforts in handing and reporting illegal loggers to the authorities, which has led to a drop in illegal logging over the last two years.

“The law has always been there. But there is poor enforcement up until now,” he said, adding that the people’s confidence in SFC has also grown.

He also witnessed the symbolic handing over of Corporate Adopters of Tree Plots for the ‘Bring Back the Forest’ project at the Piasau Nature Reserve in Miri.