See: Probe how Penan boy got hurt so badly 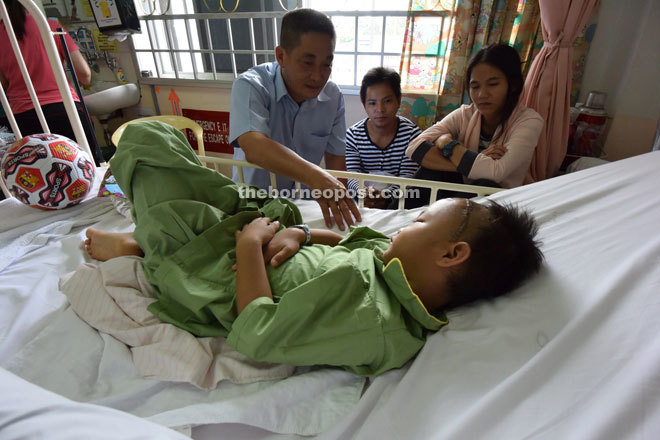 See (left) comforting the nine-year old Penan boy who was allegedly hit by a brick on his left forehead in the boarding school. With them are the boy’s parents.

KUCHING: The Education Department, police and SK Bario must investigate how a nine-year old Penan boy became so seriously injured on his forehead while in the boarding school recently.

Batu Lintang assemblyman and state PKR vice chairman See Chee How, who made the call, said, “We must ensure that boarding schools, particularly those in the rural interior areas, are safe learning houses for our children, bearing in mind that most of these children are away from their parents at tender ages.

“Besides that, it was also highlighted in a Federal Cabinet report that the perception of parents on safety and security of boarding schools are delicate issues that have led to high dropout rates, particularly amongst minority ethnic communities, particularly Penan students.”

The boy was allegedly hit on March 28 by a brick on his left forehead that required 36 stitches. A doctor at a nearby clinic stitched him up and advised his parents to send him to Miri Hospital, but Miri Hospital referred the case to Sarawak General Hospital (SGH).

See, who visited the boy at the SGH yesterday, was dismayed that the first police report lodged by the boy’s father was recorded as “for reference by the hospital and the school” only.

Subsequently, the father lodged another police report to request police to investigate the matter.

“A thorough investigation must be conducted by all the authorities concerned to ensure we can improve on the study and boarding environment, the safety and security, and to undertake all measures necessary to ensure all our rural students complete their formal education.”

“We (PKR) will definitely follow up on this matter in Parliament and the State Assembly.” See complimented all the doctors and nurses who had attended to the boy.

“They have definitely done a great job. It was reliably learned the little boy had bleeding on the surface of his brain. He could have died if the operation was not done in time. He is recovering well, not in pain, and he is eating and reading as his normal self.” See also called on the Health Ministry to address the lack of medical facilities and medical personnels in Bario and other rural places.

“The wound could have been better treated or emergency calls should have been made to transport the boy to Miri Hospital immediately after medical examinations were made.

“It appears that the lack of medical expertise and facilities in Bario Clinic caused the delay for necessary medical attention. This has prompted surgery at the SGH for a cut of about 12 inches at the forehead to remove blood clot and to prevent unnecessary medical complications.”