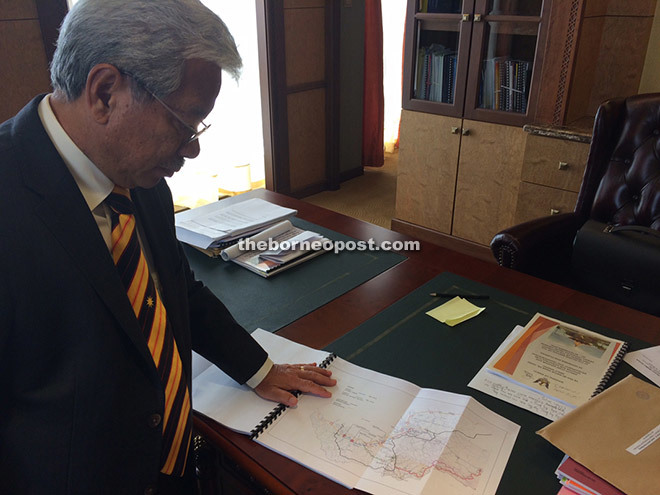 Masing showing the route of the proposed Sarawak Expressway and Sebuyau/Sri Aman/Betong Road.

THE Ministry of Infrastructure Development and Transportation (MIDT) is proposing construction of Sarawak Expressway or the Second Trunk Road which runs from Sibu to Kuching, between current coastal road and the Pan Borneo Highway.

According to its minister, Tan Sri Datuk Amar Dr James Masing who brought up the proposal at the State Legislative Assembly sitting yesterday, the road which is expected to cost RM5 billion would reduce travelling distance from Sibu to Kuching by 200km.

“It means you and I can save our travelling from Kuching to Sibu or vice-versa by at least two to two-and-a-half hours,” said Masing when delivering his winding-up speech.

MIDT has also proposed another highway which runs from Sebuyau to Sri Aman and joining Pan Borneo Highway at Betong. The distance is about 85 km.

“This is not the end of MIDT’s vision of creating a major road network in Sarawak.

We are now planning for another highway which will run towards the North East from Betong along the border with Kalimantan, Indonesia. The interior highway with a distance of about 300 km will end at Ulu Sungai Baleh where Baleh Hydropower Dam is located.”

Masing, who is Baleh assemblyman said the opening of the land in the interior of Sarawak from Ulu

Sungai Layar, Pakan, Julau, Kanowit, Song and Kapit, the road will also allow for quick accessibility to the border regions of Indonesia.

He stressed that the interior highway will allow economic development in the areas which had yet to be developed due to distance and inaccessibility and that it would ensure the security of the dams and other sensitive installations.

“This will not happen overnight. As I said before, Rome is not built in one day. So, members of the opposition please be patient and support us on this. Only by being together, we can dream big,” said Masing.

“The state government is also seriously considering the possibility of undertaking the project via Private Finance Initiative (PFI) should the need arise,” said Masing.

On urban transport, Masing said the government is committed to solve traffic congestions in Kuching, Sibu, Bintulu and Miri.

“As a long term solution, we are working together with the federal government to implement the pilot project of ‘Stage Bus Service Transformation (SBST)’ programme in Kuching.”

“All the groundwork for SBST had been done with network operator identified; bus routes verified; bus schedule and frequency determined; and contract agreements negotiated. In other words, the SBST Kuching is ready to take off,” said Masing.

MIDT is also contemplating to create a Traffic Management Unit (TMU) to carry out studies to examine the causes of traffic congestions and possible solutions in Sarawak.