Sebauh gets its own 1M’sia Internet Centre 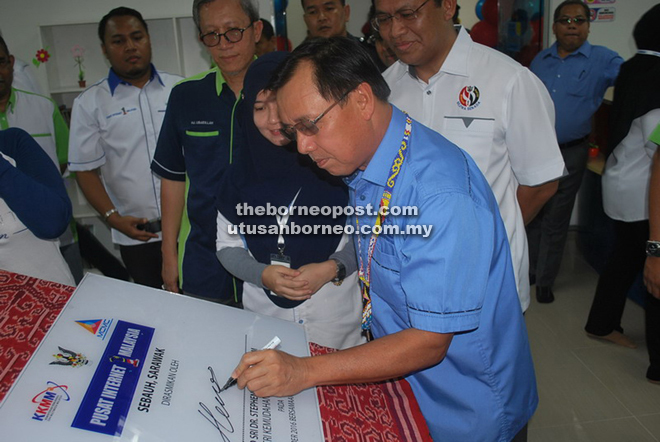 “This is just the beginning of what our younger generation can enjoy in the future,” said Rundi, who is Kemena assemblyman.

He said the facility should be used intelligently and positively by locals, especially to expand their business network.

“We look to the future, with this Internet access you can improve your livelihood,” he said, citing a successful entrepreneur from China who runs an online business.

He said many local products could be further promoted by using the Internet and encouraged Sebauh entrepreneurs to showcase their unique products to the world.

“Education is the catalyst of change. You need to get proper training and to understand the local market you must be knowledgeable,” he said, adding the centre will be fully operational by the middle of this month.

Rundi also urged MCMC to set up similar facilities in other rural areas, particularly in schools.

“So far the Internet coverage, especially in schools in the rural areas, was unsatisfactory. Rural areas should enjoy the same facilities like what we have in urban areas,” he said adding that the state government is committed to bringing more development to rural communities.

He urged locals to make use of the facility accordingly for the betterment of the community.

Sebauh Community Leaders Association chairman and event organising chairman Pemanca Limin Lamai said the regatta is very meaningful as it marks the first anniversary of Sebauh as a full district.

“We have received over whelming response from participating teams in the powerboat race who came all the way from Miri, Limbang, Belaga, Murum and other areas,” he said.